This past weekend, the first HasCon took place. It seemed to me that there were surprisingly few Transformers items revealed (and that's not even accounting for a well-publicized leak a few months ago), but one of the items that was was a tiny version of the G1 Pretender Cloudburst, which will host a "Prime Master" version of Micronus, one of the "Primes" for which the upcoming Power of the Primes line is named. This seems a good time to feature the original Cloudburst. Although I've featured Pretenders a few times on this blog in the past, I have never yet featured any of the first wave of Pretenders to be released, and doing so with Cloudburst offers an opportunity to demonstrate how the concept evolved over time.

Like most Autobot Pretenders, Cloudburst's outer shell is a human, but the first wave of Pretenders (which also consisted of Landmine and Waverider) hid the "human's" head below the nose with what appears to armor. While the blue helmet is removable (and, indeed, must be removed to open up the Pretender shell, as was also the case with some later Pretenders like Bumblebee), this leaves rather little evidence that the Autobot was specifically "pretending" to be a human rather than... well, anything else, although the suit does feature a rather puffy, "organic" look with very few straight lines, which perhaps at least helps to convey the idea that it isn't just another robot like other Autobots (especially of the period). Most (if, indeed, not all) human-like Pretenders after this wave allowed for the head to be fully exposed once any helmet was removed.

Early Pretenders (for at least the first two waves) also required the removal of a "belt" accessory before the Pretender could be opened up to reveal the figure inside. I'm not sure if Hasbro was just nervous that the shell itself wouldn't stay shut if such an accessory hadn't been included, or if they were simply trying to add play value by requiring children to have to fiddle with more pieces while getting to the inner robots, but this is one accessory that I'm glad to have seen dropped in later versions of the Pretender concept (at this point I should perhaps mention that my specimen is incomplete, as it is lacking a blue "lightning whip" weapon, but the whip doesn't necessarily need to be removed just to open up the Pretender shell).

The first couple of waves' worth of Pretenders all featured very spindly inner-robots with simplistic color-palettes and few paint applications. While these are all indeed legitimate Transformers that convert into another mode (as will be seen in a moment), it is instantly clear that the focus was on the outer shell when creating these guys. As Pretenders were given other features in later waves, the robots (while perhaps always smaller than otherwise-available Transformers) were given more personality of their own. 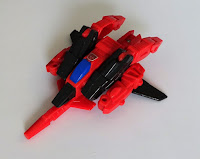 I won't go so far as to say that all of these earliest Pretenders transformed in exactly the same way, but they all follow a similar theme: fold the legs up, maybe one or two small additional steps, and add the weapon on to complete a vehicle that is mostly whatever Hasbro says it is simply because they say so. Certainly, the transformation seen recently with Action Master Elite Double Punch was no more complex than this. While Pretenders would more or less always be smaller Transformers, as necessitated by the gimmick of fitting inside the outer shell, many later Pretenders (the Classics Bumblebee and Starscream are fine examples) would demonstrate at least moderately greater complexity and/or variation between them.*
*I'm not really counting the more recent Fun Publications-produced Pretenders, such as Optimus Prime, in this analysis. In the case of Optimus/Oilmaster, the inner robots were not created with the Pretender concept in mind, and in the case of the not-yet-featured Megatron, not only were those inner robots designed without the Pretender concept in mind, but the shell that came with that toy was designed for an entirely different toy (which itself wasn't designed with a Pretender shell in mind!)