While BotCon originated in America in 1994, there have always been Transformers fans in other countries, as well. Naturally, these fans like to attend conventions a bit closer to home. Thus, in 1998, the first "international" BotCon was held when BotCon Japan became a reality. Like its American cousin, BotCon Japan 1998 offered exclusive toys officially produced (in this case, by Takara). Unlike American BotCon exclusives (at least, at that point in time), the BotCon Japan exclusives utilized concepts previously intended for production, but which had been significantly changed by the time the molds actually made it to the shelves. Thus, the mold that saw wide release in 1996 as the polar bear named "Polar Claw" was finally released as the brown bear it was originally intended to be. 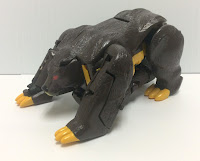 The precise name of this character/toy is subject to a couple of oddities. Apparently, the character was intended to be "Grizzly-1," consistent with the toy that was advertised in the Optimus Primal vs. Megatron 2-pack comic. However, the name "Barbearian" was also tossed around in advertising at one point, and the convention organizers wanted to include a reference to this in the Tech Specs that were created for the toy. Something got miscommunicated somewhere down the line, and not only did the "Barbearian" name make it to the front of the package, but even that was misspelled, yielding the name "Barbearerian" (which no one seems to use, despite its claim to legitimacy by actually being on the official product).

According to the size-classifications of the time, Grizzly-1 was a "Mega", which puts him roughly around the size of a "Voyager" today. The transformation is quite simple by modern standards, although at least some of that enabled the designers to work a few special features into the toy.

The first of these is a minor motion gimmick, whereby if you stand the bear mode up on its back legs, the bear's mouth opens up to display some fierce fangs. I found this difficult to photograph well, but this image from Ben Yee's site shows the feature on the Polar Claw version of the mold. Another extra is this small bat that is formed from parts of Grizzly-1's right forepaw. Doug Dlin (who translated the bio, originally written in Japanese, into English for the Tech Specs linked above) named this bat "Nightshriek." 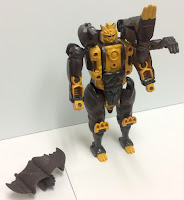 The remaining feature specific to Grizzly-1's size-class is the superfluous claw that shoots out of Grizzly-1's shoulder (the bear mode's other forepaw), which the Tech Specs describe as a "power claw" that can apparently due tremendous damage, although it strikes me as a pretty goofy. Grizzly-1 also sports a "mutant head," common to most toys originating in the early part of the Beast Wars line. Grizzly-1 is perhaps unique in that his Tech Specs suggest that the mutant head is used to switch between the default "Grizzly-1" personality, and the berzerker (sic) "Barbearian" personality. Apparently, even Nightshriek makes himself scarce whenever Grizzly-1 takes on the Barbearian persona!

As a BotCon Japan exclusive, Grizzly-1 was only produced in limited numbers. At only 600 units officially in circulation, this may be the rarest legitimate Transformer currently in my collection (although I have had rarer ones in the past).
Posted by Mark Baker-Wright at 9:00 AM