Celebrating the 30th Anniversary of Transformers: The Movie - The Marvel Comics Adaptation

Five years ago, I wrote a post celebrating the 25th anniversary of The Transformers: The Movie. Since that was a retrospective post, everything I wrote there is just as valid for this, the 30th anniversary, so while I want to say something different today, I also want to refer you to that post.

It's no secret that I'm partial to the Marvel Comics interpretation of the original Transformers franchise of the 1980s, and I'm proud to say that I have every issue of Transformers-branded content they ever released. That said, the three issues of the mini-series adapting the movie were the last pieces I gathered for that collection. This is probably because, being an adaptation of a cartoon-continuity work, I originally never considered it a part of the comic book continuity I cared most about. However, due to the efforts of UK scribe Simon Furman (who, a couple of years later, was tapped to write for the US comic, as well), the events of the movie are considered part of the comic continuity, as well, and so it really wasn't fair to exclude these issues. 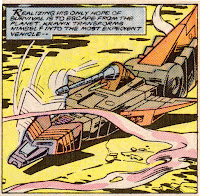 When adapting a story from one medium to another, there are inevitable changes where elements are added, or taken away, or done differently. This comic adaptation is certainly no exception. One such change is obvious within the very first scene of the first issue, as Kranix, one of the Lithones whose planet is devoured by the evil Unicron, actually transforms into a spaceship so that he might escape the destruction of his homeworld. Even the mode of Lithone's destruction is decidedly different, as it is apparently destroyed by a gaseous cloud rather than physically eaten by Unicron (who doesn't even appear on the pages featuring Lithone's demise), although the text itself makes clear that Unicron has consumed the planet. These changes apparently arise from an earlier version of the script used by adapter Ralph Macchio (not the actor who rose to fame in the original The Karate Kid), rather than the finished product of the movie itself.

Notable among things the comic lacks that the movie included, Hot Rod's early role in the story is almost entirely absent. Although he does see the Decepticon-controlled shuttle approach Autobot City prior to the attack in which Optimus Prime and Megatron fight each other to the death, Hot Rod's role in interfering with that fight is missing, as is the obvious foreshadowing of his role at the end as the dying Prime passes the Matrix to Ultra Magnus. Thus, his eventual evolution to become Rodimus Prime at the story's climax seems to come out of nowhere. 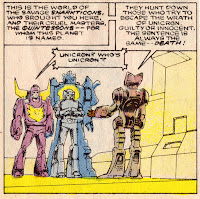 Another significant addition comes in the scene where Kup and Hot Rod meet Kranix on the planet Quintesson (called Quintessa in the cartoon). Whereas the question of how Kranix came to be captured by the Quintessons is never addressed in the movie itself, the comic Kranix explains that the Quintessons hunt down survivors of Unicron's attacks. The nature of the Quintessons' relationship to Unicron is never addressed, even here, but at least it does provide a tiny bit of plot connection between the first scene of the story and the one in which our heroes learn about who and what Unicron is while imprisoned on the Quintessons' planet.

These kinds of differences between the comic book adaptation and the animated movie naturally suggest the question, "Which version of events is canonical to the comic continuity: the finished movie, or the comic adaptation?" I imagine that a case could be made for either, and none of the differences are definitive enough, nor called to bear in future stories explicitly enough, to force a single answer. That said, I'm glad to have the comic adaptation on-hand. Even when the details differ irreconcilably from the movie it adapts, it sheds light on story details that we would likely not see otherwise.
Posted by Mark Baker-Wright at 9:00 AM