BotCon 2016, possibly the last BotCon ever, has now come and gone. I've had plenty of time to think about the event in the couple of weeks since my return home (partly due to the flu I and so many other convention attendees came home with!), but I'm sure I'll still only be able to skim the surface here.

This year, the convention was in Louisville, KY. While I have not typically travelled to non-California BotCons, I had already committed to doing so for this year even before the location and the probability of this being the last BotCon had been announced. But those bits of news made this convention an even more important one to attend. Louisville, as long-time readers (and friends and family) already know, is where I grew up, and where my parents and siblings still live. This did mean I wouldn't be staying at the official BotCon hotel, but besides saving a ton of money, I would have wanted to spend some time with my family, anyway. As to possibly being the last BotCon ever... well, I was also at the previous "last BotCon" in 2004, so who knows if this time will actually be the one. But I still wanted to be there.

This time around, I got to attend the convention alongside my brother, which was a rare thing. After picking up our pre-registration materials on Wednesday night, the first thing we did was the customization class on Thursday. Having done a this a couple of times before, first in 2009 and later in 2013, and both times being reminded of my hatred of those metal pins used in the construction of Transformers, I probably wouldn't have signed up for this one if my brother wasn't interested in experiencing it himself (and I've always said this was something people should experience at least once if they had the chance). I'm extremely glad I got in on this one. It turned out the custom class figure this year was a Combiner Wars version of Ratchet, and given the nature of the customizing class, that meant I got to make sure it was a Marvel Comics-style Ratchet rather than a cartoon-inspired one (as is more well-known in the larger Transformers community). 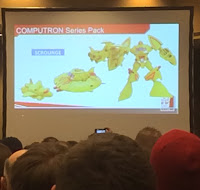 The Hasbro panel was a highlight among the panels at the convention, but I'd be lying if I said there were any earth-shattering reveals. Most of the "new" information had been leaked previously, but even so, I was very interested in the confirmation that Scrounge will finally be given an official figure (if admittedly a Cosmos retool I'll have to buy a whole Combiner Wars box set to get). The Hasbro display in the room across the hall from the dealer room was another convention highlight. Someone must have had fun putting the "Titans Return" battle display together in the center. With so many homages to mid-era G1, this is an exciting time to be a fan.

The most enjoyable times of the convention proved to be a bit of a surprise, however. I knew I'd get to spend some time with friends I hadn't seen in person in perhaps two decades (we're friends on Facebook, of course), but hadn't expected the experience to be so profound. And I simply cannot express the sheer joy of seeing my brother's best friend's son's enthusiasm at seeing the dealer room. Later on, while we were eating lunch, there was a moment when my brother, his friend, and the child were all playing with G1 Transformers just like they might have done on the schoolyard. That was worth the price of admission all on its own.

If this BotCon is indeed the last, I'm definitely sorry to see it go. The idea of an "all brands" Hasbro convention (as is currently being rumored) doesn't really appeal to me at all. I'm interested in Transformers, not those other brands, and I fear that the Transformers experience at such a convention would inevitably be diminished by the need to give those other brands their due. Even so, I'm very glad to have had the experiences BotCon has given me over the past (for me) 18 years (this year's flu notwithstanding). And, of course, there are the toys! I'll get around to featuring some of this year's BotCon exclusives in due time.
Posted by Mark Baker-Wright at 11:15 AM