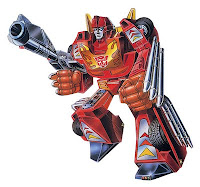 When writing about the original animated Transformers movie the other day, I mentioned that I actually don't have very many of the original toys that came out of the new characters the movie introduced (although readers of my Are You Smarter than a Fifth Grader? parody will note that I do have Wheelie). Much of this can be easily explained by the fact that my childhood dollars were limited. Perhaps it's a bit more surprising that I haven't gone back and picked these toys up in my adulthood, although I do of course have updated versions of many of these characters (Titanium Scourge is just one example). As to the original molds, Hasbro and Takara have reissued some of these toys in more recent years, and I do have a couple of these, so I'll take advantage of the anniversary of the movie to feature them today and on Friday, starting with the 2000 Japanese reissue of Hot Rod.

Like Transformers: The Movie itself, the original Hot Rod toy came out in 1986. Up until this point of the Transformers toyline, Hasbro had been using molds that were originally created for other toylines in Japan. As of the 1986 line, Hasbro had more or less run through the molds to which they had access, and needed to start creating new designs. Most of the characters designed for Transformers: The Movie were especially unusual in that the robot mode designs were actually created first, rather than the vehicle modes, as has been the case for the vast majority of Transformers toys. Deciding on a vehicle design from which to work generally allowed for reasonably realistic alternate modes, but starting from the robot mode was another thing altogether. I've never heard it argued that this is why the movie was set in the then-future year of 2005, but a future setting clearly gave the designers freedom to come up with alternate modes free from the restriction of having to look like existing real-world forms. Any such vehicle could be plausibly explained as either "futuristic" or "Cybertronian." 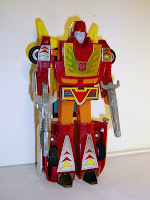 Hot Rod is arguably the main character of Transformers: The Movie. His character is that of a stereotypical brash young hero who must endure a coming of age to eventually become the new leader of the Autobots after Optimus Prime's death.  This is specifically juxtaposed with the character of Kup, who is a stereotypical "old guy."  Having character archetypes so clearly age-based may seem a little odd when one considers that we're talking about a race of robots who apparently can live for millions of years without apparent signs of age, but it is what it is.

More on Friday!
Posted by Mark Baker-Wright at 12:00 AM