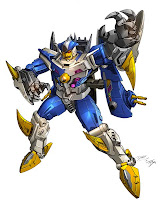 Predacon Sky-Byte
Exclusively at BotCon
Do you envy me?

I mentioned last week that despite the fact that BotCon 2010 was nominally a Generation Two-themed event, the exclusives were actually a bit of a hodge-podge.  No exclusive that year came more from out of left field than Sky-Byte.

BotCon Sky-Byte is a remold of the 2004 Energon Sharkticon figure (with a new head), but bears a rather remarkable resemblance to the original Robots in Disguise character.  Sky-Byte is easily one of the most memorable characters to have been created in the first part of the 21st century.  The entire Robots in Disguise cartoon has a wacky flavor to it that sets it apart from other iterations of the Transformers franchise, but Sky-Byte’s character, with his penchant for breaking into haiku in moments of self-congratulatory arrogance, is rather unique. 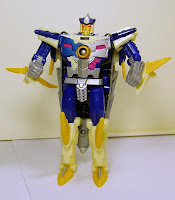 Sky-Byte is evil
Yet has a gentle side, too.
Like his poetry?

Of course, BotCon Sky-Byte isn’t supposed to be the same Sky-Byte as the Robots in Disguise version, but rather his doppelganger from the “Wings” universe (that’s Fun Publications' designation for the cartoon-like continuity in which the BotCon 2010 comic takes place, named for the BotCon 2009 story “Wings of Honor,” which takes place in the same universe).  Although this Sky-Byte is distinctive in having a so-far unexplored connection to the G1 cartoon bad guys known as the Quintessons, and leads a group of Sharkticons (similar but not identical to the better known Sharkticons of old), he otherwise retains many of the characteristics of the Robots in Disguise version that made the Sky-Byte concept popular in the first place.  I hope he shows up again in either BotCon- or Transformers Club-related fiction.  Such a fun character simply shouldn’t be allowed to go to waste!

Looking for Sky-Byte?
Write to Fun Publications
Tell them you want more!
Posted by Mark Baker-Wright at 10:00 AM