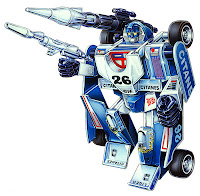 Mirage is one of those Generation One toys I picked up from some flea market or another well after the Generation One era had passed. I'm glad that I did, especially given that it remains one of few Generation One toys to have never been reissued by Hasbro or Takara (there are some decent quality replicas out there, but between the high price tag and the fact that they're of questionable-at-best legality, I don't recommend them). 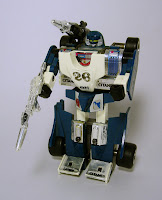 You wouldn't notice it to look at it, but my specimen of Mirage has been broken and repaired. Unfortunately, G1 Mirage is particularly susceptible to breaking right at the middle, where you have to rotate the body for transformation. The pivot point is a very thin piece of plastic, and especially as plastic gets more brittle over the years, if this toy is going to break, that's exactly where it's going to break at. Thankfully, this problem can be solved. I didn't figure this out on my own, but from a fellow fan (NOTE: The original link is now dead. I'm including an Archive.org link, but it sadly doesn't include the original images).

Mirage turns into an Indy-style race car. This type of vehicle has been a popular one in Transformers toys over the years. Incidentally, in just about any Transformers toyline over the past decade or so, if there's an Indy-style racer made for the line, you can almost be certain that they're going to call it "Mirage." It seems that Mirage is one of those names that Hasbro is really keen on protecting. There are a few "Mirages" that aren't Indy-racers, and some aren't even Autobots, but Hasbro puts the name on it, anyway. The toy featured here is the original. I'll have more to say in a few weeks about the importance of name reuse if Hasbro wants to keep a name available for a future homages, but for now, I'll just say that Hasbro has reason to keep using the name so much, even on toys that don't exactly homage this one all that well.
Posted by Mark Baker-Wright at 12:00 AM