Remember, If Knowing is Half the Battle, the Other Half is Usually Violence

Most people who grew up in the 1980's (especially boys, I expect) probably know the phrase "knowing is half the battle," not as a saying in its own right, but as the tag line for the Public Service Announcements that would finish off the end of every episode of the old GI Joe cartoon. 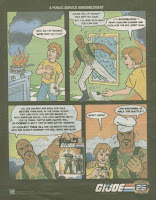 For those unfamiliar with the cartoon, each episode would end with a short piece (usually unrelated to the main story itself), in which a kid (or group of kids) is about to do something unsafe or unwise. Just then, a member of the GI Joe team shows up out of nowhere to tell the kid(s) what he/she/they should do. Invariably, the piece would end with a kid saying "Now I (we) know," after which the Joe member would say "And knowing is half the battle" which would immediately cut to the "GI Joe" name being sung in a title wipe. 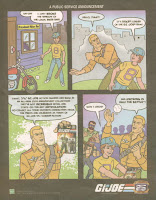 These PSAs are so iconic that they have been parodied many times over the years. Just check out what comes up when you do a YouTube search for "GI Joe PSA." Good luck finding one that's not a parody! But I was still surprised to find these two advertisements in a recent edition of Master Collector, advertising the new 25th anniversary figures. They're real advertisements, yet obviously parodies all at the same time. Check out the background pictures in the final frames!

Does what you see here interest you? Subscribe to this feed for regular updates!
Posted by Mark Baker-Wright at 9:45 AM

Email ThisBlogThis!Share to TwitterShare to FacebookShare to Pinterest
Labels: parody