This time of year, I often try to find something to feature that can tie in to the holiday in some way. I'm not always successful, but I do think it's worth the effort. There's nothing specifically "Christmas-y" about the toys I'm featuring today, but they're among the more colorful Transformers out there, and when I looked at them, it put me in the mind of colorful lights around a Christmas tree. It's not a lot of justification, but I'm going with it. 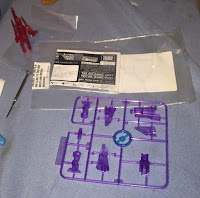 Although I've featured a couple of Arms Micron molds here on the blog, they've been re-uses of those molds accompanying other toys. I don't think I've yet featured any such toys as they were originally released as Arms Microns in Japan,* and so a bit of an explanation is in order. Arms Microns were created to accompany the Japanese versions of toys coming out during Transformers: Prime. Instead of coming pre-assembled like most Transformers, Arms Microns came on uncut plastic sprues (readers familiar with the customizing classes at some conventions will recognize that "regular" Transformers are also produced this way, but end-users are seldom exposed to this fact). The picture here shows two figures: an assembled red Shining R.A. Arms Micron to the upper-left, and an unassembled purple Shining R.A. Arms Micron that I hadn't started work on yet.

I should perhaps note here that not all Arms Microns were produced in clear-colored plastic. The use of such plastic on these guys is what makes them "Shining" Arms Microns. Specifically, they are all recolors of a mold first produced in grey called "R.A.," who accompanied the Japanese version of Prime Ratchet, and who transformed into a blade much like the weapons that came with the American Prime Ratchet (although Hasbro's Ratchet came with two such blades. Of course, the Japanese version transforms...). Quite a lot of the Arms Microns characters have initials for names like that, but by no means do all of them do. 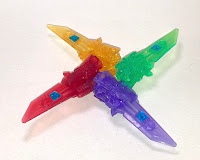 Each of the four Shining R.A. Arms Microns featured here (there's also a blue one!) was not only sold separately, but was exclusive to a different Japanese store chain. It is perhaps necessary, then, to point out that each naturally shares the original R.A.'s blade mode. However, promotional materials encouraged collectors to experiment with different combinations of Arms Microns, each of which featured standard 5 millimeter pegs and holes, which allowed for a multitude of weapon-combinations. I don't know if this specific combination was encouraged in printed promotional materials (as many were), but it did show up in at least a couple of episodes of "Arms Micron Theater," which was aired alongside the Japanese dub of the Transformers: Prime cartoon, which made the "Rainbow Shield" one of still-dozens of combinations to receive an official designation.
*Technically, Vector Oracle was released as an Arms Micron in Japan, but not only did I fail to mention this fact when I wrote that article, but it's technically not an Arms Micron mold, being a reuse of Nightstick, the Targetmaster weapon that came with Generations Cyclonus from 2008.
Posted by Mark Baker-Wright at 10:00 AM