From the first appearance of the gimmick, the Targetmasters have been closely related to the Headmasters. Besides the fact that the two appeared practically simultaneously in 1987, the gimmicks are obviously similar. Headmasters included tiny partners that became the robot's head, while Targetmasters included tiny partners that became the robot's weaponry. This added play value to the toys, even if the actual implications of such partners never made much practical sense (efforts in the contemporary fiction notwithstanding). It was inevitable that these play features would eventually return to modern Transformers lines, especially with Generation One nostalgia forming such an important role in these lines. In America, the Titans Return line was designed such that the vast majority of toys released had the Headmaster (now renamed "Titan Master") gimmick. This uniformity extended even to characters that were never Headmasters back in Generation One, including several Targetmaster characters. When TakaraTomy released their versions of these toys, they opted to more fully homage the characters as they originally appeared, which typically meant that characters such as Misfire (sadly misspelled on both the package and in the instructions with an extra "s") became both Headmaster and Targetmaster! 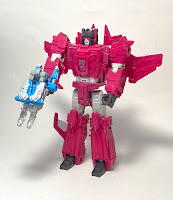 TakaraTomy's Legends line was perhaps one of the last of TakaraTomy's Transformers lines in which their version of a character was significantly different from the Hasbro version. The basic mold is the same, of course, but the Legends figure has a much more vibrant color scheme, intended to more closely represent Misfire's character as seen in the old Headmasters anime. Aimless, Misfire's Targetmaster partner, is an all-new mold, which oddly doesn't really resemble the original G1 version all that much, but since the G1 version wasn't particularly distinctive, that's not necessarily a bad thing. Given the apparent intention given to making this toy represent the character as seen in the anime, I'm actually more surprised that they didn't engineer some way of having Aimless actually replace Misfire's hand (as was done with the 2008 Cyclonus toy), but since the G1 Misfire toy didn't have this feature, either, I'm not shedding any tears over it.

Since it's just using the same mold as the Titans Return version, Misfire's head does come off and, itself, turns into a tiny robot. Since the Titans Return version didn't include a Targetmaster weapon, they appropriated the name "Aimless" for this tiny head figure, but the Legends version just considers this another version of Misfire (in keeping with how Headmasters were treated in the anime, where the heads controlled the larger robots, rather than being distinct entities in their own right). This tiny version of Misfire has much more extensive paint than the tiny "Aimless-head" of the Titans Return toy, thanks to the higher price point TakaraTomy figures sell for in the Japanese market than their Hasbro counterparts do here in the US. As with all figures from Titans Return molds, this head can safely fit in the vehicle cockpit, and the Legends Targetmaster weapon was designed to fit on top of it, just like the original G1 toy. Truly, a worthy update to the original. 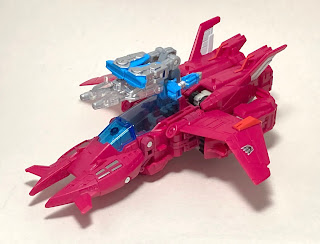