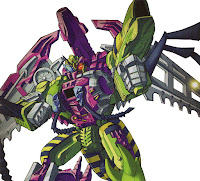 As I've noted before, when Fun Publications came up with ideas for their exclusive toys, they had to work with molds that either Hasbro or Takara had already created, but giving them new color schemes, and perhaps a new part of two (usually a new head) to evoke the concept of a character other than that for which the mold was created. On occasion, the resulting exclusive toy was something truly inspired. Thrustinator was such an inspired concept. 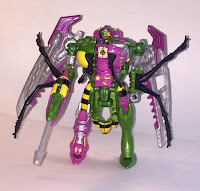 To understand why Thrustinator was special, it is necessary to explain a bit of history. In the Beast Wars cartoon of the 1990s, one of the standout characters was Waspinator. Waspinator was well-loved for a number of reasons. He had a distinctive "buzzing" speech pattern. He was arguably Beast Wars Megatron's most loyal minion. But, mostly, he had a tendency to find himself in situations where he would suffer indignity after indignity, being blown up or otherwise incapacitated on many occasions, yet somehow he would always be able to (often literally) pull himself together again to keep fighting another day. As such, he was one of the few Predacon survivors at the end of the Beast Wars cartoon, and thus he appeared in its sequel, Beast Machines. But the Beast Machines character was something else entirely. As the story goes, Waspinator made it back to Cybertron from prehistoric Earth entirely on his own power, only to have his spark ripped out of his beastly body and placed in a vehicular form, called Thrust. As Thrust, Waspinator was entirely different robot. More confident. Less accident-prone. In short, nothing like Waspinator, making the reveal that the spark that energized Thrust was, in fact, Waspinator's quite the surprise revelation. Sadly for Thrust, by the end of Beast Machines, he was reverted back to the lovable goofball of his earlier identity, and placed back in Waspinator's body again (although somehow having Thrust's head!).

Fun Publications took this concept and ran with it, taking advantage of the fact that Takara had taken several Beast Wars molds and added mechanical elements to them for their Beast Wars II cartoon back in 1998. In the case of Thrustinator, Fun Publications used the BWII remold of the original Waspinator toy, which had been used for the character "Dirgegun" (an evolved form of the BWII version of Dirge). All that needed to be done now was make sure that the mechanical portions of the mold used Thrust's primarily-purple color scheme while the remaining organic portions of the mold retained Waspinator's green, while creating an all-new head that itself was an amalgamation of Waspinator's and Thrust's heads (arguably the most intricate design work Fun Publications had ever done for a head). Thus, Thrustinator was born! 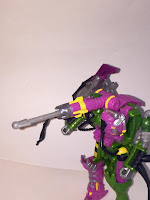 When Takara added the mechanical elements to the mold, they also added an extra cannon that isn't technically necessary for either of Thrustinator's modes, but which can be deployed in either of them (here's a picture of the cannon deployed in beast mode). Sadly, although Fun Publications did find occasion to feature Thrustinator in a couple of different comic stories, there just isn't that much actual content featuring him. As such, while he's an inspired oddity, he's still a bit of a cypher, probably to be relegated to fan fiction in the future, now that the franchise has largely moved on to other things.

Still, it really is a brilliant idea....