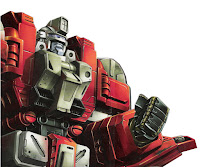 When the Transformers franchise celebrated its 25th anniversary (10 years ago now!), it used the Universe sub-line to feature homages to characters from the franchise's past. Ostensively, characters from all aspects of the franchise were featured, and this may even have been technically the truth, but it's hard to ignore the fact that the bulk of the homages came from the Generation One portion of the franchise. Personally, this suited me fine, but I can certainly understand the concerns of fans who wish that other, now lesser-known, parts of Transformers history might have been revisited more often. 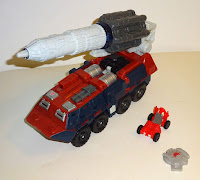 While Countdown does indeed represent one of the plethora of Generation One homages in the 25th anniversary Universe line, it is perhaps one of the most obscure such homages, taking its cue from a Micromaster character, seen here to the Universe toy's right for comparison. Other than the red color scheme, the new toy and the homage would seem to have very little in common. Part of the reason for this is that Universe Countdown is less of an homage of the Micromaster toy itself, but rather the larger rocket base that the Micromaster originally came with (I'm sorry to say that I don't have the full rocket base set in my possession to attempt comparison pictures). Even then, I'd consider it a bit of a stretch, as the giant missile on Universe Countdown isn't really a rocket intended for space travel, as was the case on the Micromaster. 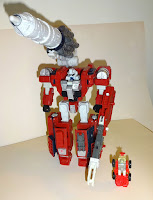 Of course, as was not uncommon with toys from the Universe line, Countdown is simply a repaint of a previous toy (in this case, Cybertron Defense Red Alert from the Cybertron line), and Hasbro was simply working with what they had. Still, Universe Countdown didn't even receive a remolded head, which meant that the robot modes didn't fare much better than the vehicle modes in terms of the new toy resembling the old, although most of the blue added to give the Universe toy some visual contrast (but which isn't present in the original Micromaster at all) is hidden in this mode, so at least the colors match a bit better. 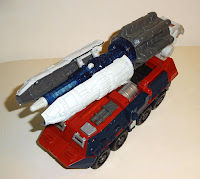 Universe Countdown naturally retains the bonus features of the original mold, including a Cyber Planet Key (visible in the vehicle mode image above) which converts the missile into a projectile-launching cannon. The missile itself can be physically removed from the vehicle, and either of these actions can activate electronic lights and sound effects. Also, the robot mode hides a couple of attachments in the figure's legs, which can be attached to the robot mode's hand-held weapon. The claw attachment is visible in the image above, but a hammer attachment is also available. As an homage, I unfortunately think that Universe Countdown falls flat, although I do think that the toy is a good one in its own right. If you're interested in a more faithful Countdown homage, the recently-released War for Cybertron: Siege version of Omega Supreme comes with a Countdown Micromaster, so you might consider checking that out.
Posted by Mark Baker-Wright at 9:00 AM