I have tended to consider May 8th, 1984 the "birthday" of the Transformers, working from the publication of the first issue of the Marvel comic. However, other dates are possible. Surely the commercial that advertised that very comic aired at least a few days earlier, although I know of no way to document that for certain. "CrazySteve" (aka "Evil King Macrocranios") over at "The Roboplastic Apocalypse" (who I was pleased to chat with briefly at TFCon Los Angeles last month, possibly for the first time in over a decade) found an ad for Transformers at Zayre that he can source to April 29th, 1984 (thanks to Radio Free Cybertron for pointing me in his direction). I honestly don't recall whether or not toys had started showing up in stores by this time (much less an exact date), so this date wins for now. Still, although I'm missing the anniversary of that advertisement by a few days, this seems a good time to say "Happy 35th Birthday, Transformers!"

The question, of course, is how to commemorate this occasion. While I still have enough Transformers toys in my collection to feature a new one every couple of weeks, even after doing such features for over a decade, it's understandably difficult to pull out a special one that I haven't done already after so many toys have been covered. Imagine my surprise when I realized that, although I'd covered a Pepsi-specific variation of the original Optimus Prime mold many years ago (even before I'd made Transformers toys a regular feature!), I had otherwise not covered this mold at all! Thus, the time has come to pull out the most complete version of the original G1 Optimus Prime mold that I own: the 25th Anniversary Universe version from 2008 (technically, the anniversary was in 2009, but this toy came out for that occasion nonetheless).

Deco choices aside, the cab that turns into the Optimus Prime robot is essentially the same as the Pepsi Optimus Prime I featured all those years ago, so let's focus on the trailer, which opens up to become Autobot Headquarters (as described on the original G1 toy's Tech Specs). Highlights of this mode include Roller, the six-wheeled little buggy that is practically a character in its own right (despite not being able to transform, as later companions like Metroplex's Scamper could do) and the mechanical drone in back. There are several obvious changes made to the original toy in creating later reissues like this one: the smokestacks are shorter (just as they were with Pepsi Optimus Prime), and the missiles are longer, among a few less obvious mold changes. Also, the colors are generally lighter than they were with the original toy (it's unclear whether this change was intentional, or merely a case of poor color-matching) and Prime's shoulders use tampographs rather than stickers to provide him with faction symbols. Even so, this is a largely faithful reissue. 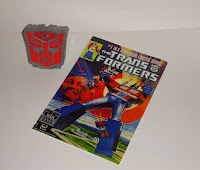 This version of Optimus Prime came with a few bonuses to commemorate the franchise's 25th anniversary. Not pictured here is the DVD featuring the 3-part mini-series that kicked off the original Transformers cartoon (I sold this many years ago, already having these episodes on another set). The two items I do still have are the copy of the first issue of the Marvel comic (which I kept despite having the original issue already) and a speaker in the shape of the Autobot faction symbol. Pressing the button at the top of the face plays one of several audio clips, including a portion of the cartoon theme song, the sounds of transformation as used in the cartoon, and clips of Peter Cullen as Optimus Prime. 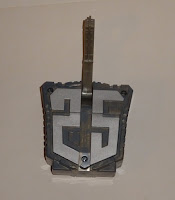 There is one more little anniversary-related surprise if you turn the Autobot faction symbol speaker around and flip up the stand (which now becomes a hook). The number "25" is proudly displayed on the back, demonstrating that this is, indeed, a 25th anniversary toy.

So now, here we are a decade later, and Hasbro is starting to roll out its celebrations for this occasion. I'm not sure if the Optimus Prime reissue that Wal-Mart's recently put out (just the cab this time, with no trailer of any kind) even counts as an anniversary release, so I'm still hoping for something a bit more special. We'll just have to see.
Posted by Mark Baker-Wright at 9:00 AM