It's not too uncommon to see a character given more than one toy within a Transformers line, but usually this happens with what might be called "first tier" characters such as Optimus Prime, Bumblebee, or Starscream. When a character like Brawn, who's only been given a small handful of toys in the entire 35 years of Transformers history to start with, is given two toys within a single line, it raises eyebrows. Nonetheless, that's exactly what happened within the Titans Return line.

The first Brawn toy to come out in Titans Return was the "Titan Master" set from 2016, pictured here on the left alongside the Legends-class toy released before the line ended the following year. The "Titan Master" sets represented a new attempt by Hasbro to release toys at a low price-point (roughly $5 at the time of release) while other classes were shifting to higher prices due to inflation pressures. Each "Titan Master" set contained a small Titan Master figure that could turn into a head that could attach to other figures within the Titans Return line, but the accessory that came with the "Titan Master" set wasn't a robot in its own right. It was simply a multi-form vehicle accessory the tiny Titan Master head/robot might interact with in other ways (such as forming the block toward the upper back of the caterpillar-treaded vehicle seen here). The Legends-class toy, on the other hand, was a full updating of Brawn as a transforming figure, although its robot head was not detachable, and thus didn't turn into a tiny robot of its own.

The small 'Titan Master" vehicle accessory changes into a hoverbike reminiscent of the speeder bikes from Return of the Jedi, and here you can see the tiny Titan Master figure transformed into its miniature robot form to ride atop it. Legends-class Brawn's robot mode should come as no surprise, as it is a faithful updating of the classic character. One significant change this time around is the arm-shield created out of the back section of the vehicle.

Here is a close-up of the Titan Master figure transformed into its "Brawn's head" mode, sitting on Legends-class Brawn's shoulder so you can compare the two heads. The Titan Master head is slightly larger, and while it interprets a few visual cues differently, it is unmistakably the same character. While I'm sure it's possible to customize the Legends-class toy to incorporate this Titan Master head, the few customs I was able to pull up on a quick Google search utilized different base molds entirely. It's certainly beyond my skills, or indeed even my inclination to try. 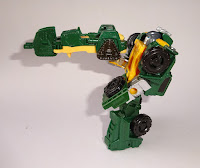 The "Titan Master" accessory has one more mode to look at, which is really just a minor reworking of the "speeder bike" mode with a 5 millimeter handle pulled downward so that a figure with appropriately-sized holes in its fists (such as Legends-class Brawn, conveniently) can hold it. It's actually one of the more convincing hand-weapons (IMHO) in this entire line, but of course it's here mostly to provide play value for young children, for whom "convincing" is a somewhat different standard than it is for me, no doubt. 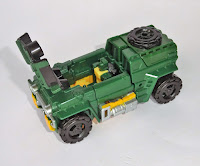 One more feature of the Legends-class toy bears mentioning, because it is held in common with most other Legends-class toys in the Titans Return line. Although these Legends-class toys were not given detachable, transformable heads of their own (like larger Titans Return figures), they could still open up their vehicle modes to provide a space for Titan Master figures to ride inside. Unfortunately, Brawn is also like most other Legends-class figures in that, once you close up the compartment, you can't actually see the tiny robot riding inside. While I'm sure many fans are glad that the toy didn't use transparent plastic for the window compartment that opens up here, as it would presumably have meant fragility elsewhere in the figure, it would at least have meant you could see Brawn driving himself around.

Missed opportunity or narrow escape? You decide.
Posted by Mark Baker-Wright at 9:00 AM