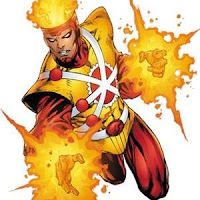 "Shag" Matthews, who created a website called Firestorm Fan (now largely defunct) and subsequently launched a (mostly) Firestorm-specific podcast and a network of other related podcasts (which is very much alive these days), brought my attention to the fact that today, December 6th, 2017, is the 40th anniversary of the publication of the first issue of Firestorm: The Nuclear Man, which featured Firestorm's first-ever appearance! While long-time readers already know of my affection for the character, I confess that I hadn't been keeping up with this particular anniversary (if I had, I'd have planned ahead to feature one of the Firestorm action figures I have, something I'm not in a position to make happen before the day ends). But now that I do know about it, I can't just let it go by without notice!

This is how the cover of that first issue, published on this date in 1977, looked. This is how Firestorm was introduced to the world as part of a much-hyped "DC Explosion." The series was cancelled after only five issues as part of what was later called the "DC Implosion."

A never-before-seen hero, introduced in his own title, which died after only five issues (and in the middle of a story, at that!). That might have been the end of it. Most characters with such ignoble false starts are never heard from again. Creator Gerry Conway, however, had other ideas. Already an important comic name after an historic run on The Amazing Spider-Man, Conway was by 1979 the writer of Justice League of America (often referred to as "JLA," arguably DC's flagship publication at the time). Conway somehow managed to get permission to write an issue of DC Comics Presents (a Superman team-up series that served to spotlight lesser-known characters) featuring Firestorm for the first time since his title's cancelation a full year previously. That issue ended with Superman suggesting Firestorm might become a JLA member, which occurred only half-a-year later. Almost immediately after Firestorm's JLA introduction, Firestorm started to appear in a back-up series in The Flash, which was apparently popular enough to lead to Firestorm being given his own series once again in 1982, called The Fury of Firestorm (never mind that Firestorm's never really been an "angry" character. The alliteration's still cool).

I myself first learned of Firestorm through his introduction in the Superfriends cartoon near the end of its long run on Saturday mornings. The idea of a hero who was actually a combination of two people (one of whom wasn't much older than I was) fascinated me, and I started picking up his comic book shortly thereafter. In fact, The Fury of Firestorm is the first superhero comic book I purchased on a regular basis (I don't really recall, but I almost certainly was already picking up Marvel's Transformers by this time, but that's a rather different genre).

The rest, as they say, is history. While it's perhaps too much to say that Firestorm has ever become one of DC's top tier characters (he's currently been missing entirely from their comic books since the end of the Legends of Tomorrow mini-series of a year-and-a-half ago), he's at least been heavily featured on television again in recent times (in the Legends of Tomorrow TV show that really only shares a name with the comic mini-series, as well as in the Justice League Action cartoon). May Firestorm's flame continue to burn bright!
Posted by Mark Baker-Wright at 12:00 PM