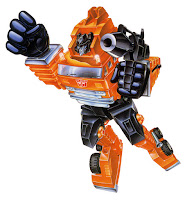 If you've been reading my blog for any length of time, or if you're otherwise simply well-versed in Transformers history, then you already know that pretty much all of the toys that were a part of the Transformers line when it began back in the 1980's reused molds from other toylines, most notably Diaclone in Japan. This was true for the first couple of years of the franchise's history. Moreover, many of these molds were used multiple times to create different Transformers characters. Thus far, Grapple is no exception, having seen a previous life (with a few changes) as Diaclone toy #20, the "Truck Crane."

Indeed, even the "Truck Crane" was not the first use of this mold, which was originally released as Diaclone #10, "Fire Engine," the toy that eventually became the Transformer Inferno. Both Inferno and Grapple first came out in 1985, which makes them mildly unusual among Diaclone-mold vehicular Transformers, in that no version of the mold came out in 1984, when the Transformers first hit toy shelves (Skids also had this distinction, but Grapple/Inferno may be the only such toys with a remold that didn't have a 1984 version). There is some speculation that the Grapple mold may have been intended for a 1984 release. This speculation is supported by a brief cameo appearance as a character then named "Hauler," in the original 3-part cartoon, More Than Meets the Eye, that first introduced most children to the Transformers concept (the comic came earlier, but it never did have the same reach). But, for whatever reason, Grapple didn't come out for another year, when it did so alongside Inferno.

My own specimen of Grapple is the "Commemorative Series" reissue that came out in 2004 as a Toys R Us exclusive. Like other such reissues, this toy was originally way overpriced, and it lingered on the shelves for a long time. Toys R Us is pretty notorious for hardly ever marking down prices on their toys to put them on clearance, but I was eventually able to grab Grapple for about $6, and at that price, I considered him a pretty good buy. The toy doesn't have a lot of play value compared to similarly-priced toys today, having only limited articulation, but it's still a nice throw-back to the original era, and I'm always glad to have those.
Posted by Mark Baker-Wright at 12:00 PM