Every once in a while, a character in Transformers: Animated, while definitely being an homage to the Generation One character for which it is named, shows signs of being at least as much an homage to another character entirely.  This is the case with Ratchet.  While Ratchet remains the doctor of the group, just as the original version was, the personality of Ratchet bears a stronger resemblance to Kup, the "crotchety old guy" character that originated in Transformers: The Movie back in 1986.

Like Kup, Animated Ratchet is a veteran of the seemingly endless war between the Autobots and the Decepticons (although, when Animated begins, there hadn't been any serious fighting for some time, as the Decepticons were in hiding).  The mold for Ratchet attempts to convey the sense of Ratchet's age in a couple of ways.  One is the intentional "beer belly" of Ratchet's robot mode.  Another is the broken crest on the right side of Ratchet's head, one of a couple of injuries from times gone by that this doctor has apparently never sought have healed for himself (the other will be covered when we get to Lockdown).  In keeping with being a doctor who's main patients are, in fact, machines, Ratchet comes with a number of tools that can either be held in his fists (actually, they clip on the inside, rather than actually being "held") or stored on clips in a compartment behind his back.  The toy also features a flip-out tool on each fist, apparently intended to represent electromagnets that Ratchet is often seen using in the cartoon, but they get only half the job done.  Even less, really.  Thankfully, third party groups have stepped up. 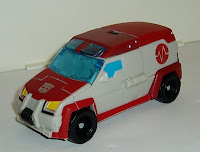 Like his Generation One counterpart, Ratchet turns into an ambulance and a generally red-and-white color scheme.  Whereas most modern Transformers are designed so that all weapons and accessories can be stored in both modes, this is not possible for Ratchet, and all of those tools have to be stashed somewhere for safekeeping whenever Ratchet is in this mode.