Every Transformers franchise these days needs an Optimus Prime and a Megatron.  It's all but unthinkable that Hasbro would attempt a new line that lacked leader characters with these names.  The Animated line is certainly no exception, and Hasbro made sure to get these characters in kids' hands quickly by releasing this two-pack right at the beginning of the line. 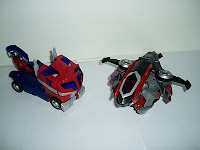 The figures aren't exactly analogous to each other, however.  For some reason, the pack includes an Earth-mode Optimus Prime alongside a Cybertron-mode Megatron, thus creating a "battle situation" that never actually existed at any point in the cartoon timeline.  Why did they do this?  Although it seems evident that the designers had Megatron's eventual osprey-like Earth-mode in mind already by the time these toys were made (let's face it, Cybertron-mode Megatron doesn't look like much of anything, but it's hard to imagine looking like this unless the parallel was intentional), I can only assume that this was done because they weren't ready to release Megatron in full Earth-mode until a little bit later in the line (Megatron sits out most of the first season of the series and doesn't get his Earth-mode until the season finale). 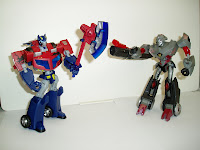 A while back, I mentioned that I'm not a fan of battle-damage on Transformers toys, so at least I'm glad that it's not done very often.  I'm especially mystified as to why they made such an aesthetic choice with these two figures at the very beginning of the line, and perhaps even more importantly, why they decided that the peculiar patterns they gave these figures were supposed to look like "battle damage."  These guys look more like they have some alien fungal infection, if you ask me (perhaps breaking out with a case of "Cosmic Rust"?). 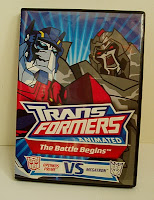 In addition to the figures themselves, this set came with a DVD that features the first episode of the cartoon, alongside some teaser features intended to spark interest in the Animated franchise.  This DVD is perhaps notable for including a longer version of theme song, with additional lyrics that were never used on the actual broadcasts.  I actually wish that Hasbro would include little pack-ins like these more often.  I can only assume that they don't think it's worth the time and effort it takes to include them more than once in a blue moon, but at least we do get these bonuses once in a while.
Posted by Mark Baker-Wright at 12:00 AM