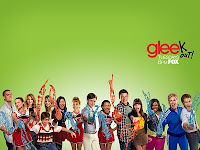 Full disclosure.  I'm still working my way through the first season of Glee (with the help of Netflix).  I've still got one more disc left to go to finish out the year, and then I'll be able to catch up with Season Two via Hulu.  My wife and I may be latecomers to the fad, but once we finally saw an episode, we were hooked.  I expect that anyone who's ever struggled with issues of identify and acceptance (and I expect that's anyone) can find something to identify with in this show.

One aspect (of many) that we enjoy about Glee is the variety of music used for the show.  It's not all show tunes, but neither is it all pop music (although these are certainly the two most common genres used), and the music has spanned the past several decades, so it's not just stuff that teens and college students enjoy, but includes music for us "older folks," as well.

As with any show that uses music originally created by other people (which means, for Glee, practically all of it), Glee has to get permission from the rights-holders of the original music to use it.  The producers have expressed surprise that so many artists have granted such permission (in fact, Madonna granted them the rights to her entire catalog for the Madonna-based episode they did last year!), but it shouldn't surprise anyone that a few artists have refused to grant it.

One of those holdouts, apparently, is the "virtual band," Gorillaz.  Lead singer Damon Albarn has apparently gone public about this position despite the fact that the folks at Glee haven't even asked for such permission yet:

[N]ot that they've asked us because they haven't, and now they definitely won't.

I'm not sure I understand the point of this "pre-emptive strike."  If you don't want the show to do your stuff, then don't let them, but no need to bother the rest of the world (which predominately likes the show) about it.

And the Glee-griping doesn't stop there.  Albarn also throws in his two cents at the news that Glee covers have now hit the record for the most appearances on Billboard's Top 100 chart for non-solo acts (a record previously held by the Beatles):

"Those songs won't last like the Beatles by any stretch of their imagination," he says. "They'll be forgotten in a few years' time."

I'm sure he's correct, but so what?  Glee has been created for an entirely different purpose than a pop group.  They don't exist to create music.  Rather, they use existing music as a vehicle to tell a story.  If the music wasn't already known, or already popular, Glee's use of it would be meaningless.  Glee couldn't exist without "real" musicians doing their thing, and I think that pretty much everyone involved is fully aware of that fact.

It seems to be an unfortunate fact of life that stirring up controversy is better publicity than just doing what you do, and doing it well.  Glee knows this fact, and I don't think I'm surprising anyone who's watched it when I acknowledge that the show's not for everyone.  I'm sure the "Religious Right" (for example) is furious that it's doing so well.

Gorillaz has obviously figured this out, as well.  I know I'd never heard of them before reading this article.
Posted by Mark Baker-Wright at 12:00 AM

Email ThisBlogThis!Share to TwitterShare to FacebookShare to Pinterest
Labels: television