On the comparatively rare occasions when I am with a group of friends playing board games at their house, it seems that Taboo is almost always requested.  I usually am pretty happy to join in, because I know the truth: Taboo is pretty much the same game as one of my favorite game shows, which in the 1980's I knew as The $25,000 Pyramid!

Yes, Taboo adds the wrinkle of not being able to say certain obvious words, rendering it a bit more difficult, but Pyramid was popularizing the idea of trying to get your teammate to say the correct word or phrase based on definitions you give them for a good decade-and-a-half by the time Taboo (and the later, similar game, Catch Phrase) had begun to be marketed to the public. 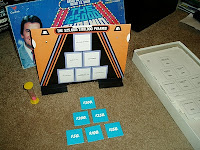 Pyramid captures the gameplay of the game show quite nicely (although it's rather difficult to have teammates trade off in the middle of a round, given the fact that all clues for that round are visible on the side of board available to the players giving them), if perhaps it doesn't capture the snazzy feel of the set with the rotating trilons anything near as well.  Instead of a digital timer, you are given an hourglass with bright pink sand in it (a fairly common element in board games with a timed element).  The hourglass is remarkably well-calibrated to the expected 30-second time limit required for the regular game.  Unfortunately, only one hourglass is provided, requiring someone to flip it over in the middle of the 60-second "Winner's Circle," which is more than a little unfortunate.  As anyone who's watched the show can attest, this round can be quite intense, and one really can't expect the players to be paying attention to the clock when they're trying to win the round!

The producers of the game were wise enough to realize that gameplay for the daytime $25,000 Pyramid and the nighttime $100,000 Pyramid is more or less identical, and thus advertise that you can play either version you want on the sides of the box and in the rules.  Unfortunately, they also decided to cram both numbers at the top of the paper pyramid board provided, which further detracts from the visual feel of the game, with the top prize proudly (and singularly!) on display at the top.

Still, these are minor quibbles.  The game plays like a Pyramid game should, and that's what really matters.  If you're able to pick up a version of this game, I highly recommend it, and would especially suggest pulling it out for your next party (perhaps using a stopwatch rather than that hourglass, though)!