I've commented before that by the middle of the original Generation One toyline's run, it seemed like every Transformers toy had to have some kind of gimmick beyond just the ability to transform.  Fastlane and Cloudraker represent a gimmick that I'm actually a bit surprised has never been revisited in the years since: these two characters are "clones."  Looking at the box art immediately to the left, this may not be immediately apparent.  But if one considers how unusual it is to have box art represent the vehicle mode of a toy, one can probably guess at what's going on.... 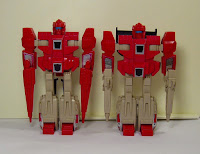 In this picture, Cloudraker is on the left, and Fastlane is on the right.  Both toys have (more or less) identical robot modes.  I feel the need to add that parenthetical because it's so ridiculously easy to tell which toy is which with even a cursory glance, especially with Fastlane's spoiler visible behind his head.  For some reason, the toy designers decided to give each character distinctive weapons, too, which would seem to defeat the purpose of having "identical twin"-type robots, but it is what it is.  If, for whatever reason, those obvious visual cues aren't enough to help you tell the clones apart, the toys each have an extra rubsign in the center of their chest, which doesn't reveal their faction symbol as traditional rubsigns do.  Instead, Fastlane's extra rubsign reveals a picture of a race car while Cloudraker's rubsign reveals a jet.

Let's look at the vehicle modes separately.  As already noted, Fastlane turns into a race car.  Although the first couple of years of the toyline tended to feature vehicles that one might find in the real world, Fastlane is well in-keeping with his later-Generation One fellows by being a totally made-up design.  Given the design intentions of taking a single robot design and coming up with two unique vehicle modes (and thus, distinct transformations), this is only to be expected.  It probably bears noting that the instructions don't actually specify that Fastlane's weapons are to be added on to the vehicle mode as I have them depicted here.  However, given that the toy has the correctly-sized holes available on Fastlane's form (and, perhaps just as importantly, that Cloudraker does not have holes in this location!), I'm fairly confident in saying that this is an intentional undocumented feature.

Here's Cloudraker in jet form.  Not only is this another clearly-fictional design, but I don't really see how this jet could ever actually fly in the real world, given how narrow those wings are!  Of course, the wings kind of have to be that skinny, so that they can hide behind the legs of Cloudraker's robot mode (although I could certainly have done a better job of hiding the wings in that picture above).  Like Fastlane, Cloudraker has weapon-sized holes on the jet's underside that don't exist there on Fastlane (although in this case, Fastlane's transformation prevents the possibility of putting holes there), allowing for an undocumented "attack plane" mode.

Although I did say that the concept of "clones" hasn't been revisited in the years since these toys were released, Fastlane and Cloudraker aren't the only clones in the Transformers franchise's history.  A couple of Decepticon clones named Pounce and Wingspan were released at the same time.  Maybe I'll get around to giving Pounce and Wingspan their own feature someday....
Posted by Mark Baker-Wright at 12:00 AM