Star Trek: The Next Generation Action Figures by Galoob

Back in 1988, the Star Trek franchise was being reborn.  Star Trek: The Next Generation had just premiered on the airwaves the previous Fall, and opinions on whether or not it was still a worthy addition to the Star Trek franchise were still widely divided.  The fact is that whether or not this new modernized version of Trek would succeed was very much an open question in these early years.  As such, the introduction of a toy line by Galoob dedicated to the new series was a significant risk.  Seen in this light, the fact that the line failed may come as less of a surprise than it might if one only considers the success that future Trek endeavors have had (of course, this apparently does not include the toy line dedicated to the movie that came out last summer.  That line is warming shelves so badly that Playmates isn't even going to bother to release the second wave so that the courageous few who actually have been trying to complete the "bridge" and "transporter room" sets will now never be able to do so, but I digress...).

The initial line of figures consisted of six members of the crew of the new U.S.S. Enterprise: (from left to right) Yar, Worf, Riker, Picard, LaForge, and Data (don't ask me why Counselor Troi and Doctor Crusher were never included.  A Wesley Crusher figure was advertised for a later wave, but never actually released).  It's pretty obvious that these figures all represent the characters as seen in the first year of the show.  Of the six characters depicted, only two of them looked more or less the same when the second season started (and one of the others was already dead by then!  Worst mistake of Denise Crosby's career, no doubt...).  All come with phasers molded into their hands.  They also came with tricorders that one basically had to strap around the entire forearm to get them to "hold" (atop the clenched fist of the other hand).  I've long since lost those.

For some reason, the Tasha Yar figure was pretty hard to find back when the line first came out (it might have been due to the character's death, but I honestly don't know this to be the case), and I ended up paying a ridiculously high price to get it about a year after I got the others.  Prices have since evened out quite a bit.  A series of alien figures was also released, but I never did actually see any of those in stores, and the prices they have always commanded on the secondary market have been too high for me to even consider bothering.  The Data figure, I'm told, has been released in a number of different variations (the face is apparently colored differently on each), and opinions differ as to whether one variation is worth more than another.  Here's mine, but I'm not looking to sell it, so it doesn't really matter.

I did manage to pick up the shuttlecraft accessory at one point. A "Ferengi Marauder" was also released, but never having bought a Ferengi figure, I didn't see much point in getting that.  Like the figures, this shuttlecraft uses a design that was more or less abandoned by the television show after the first season.  If memory serves, the blue of the warp engines was added with a blue paint marker.  The toy originally came with badly-applied stickers.  I'm not a big fan of the paint applications I made to my toys when I was a kid, but I still think it worked pretty well, here. 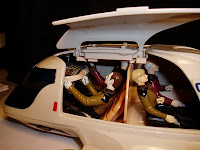 The shuttlecraft was advertised as being able to fit six figures, but I find that only works if you toss four of the figures in back without regard to having any place to go.  Yeah, they fit, but they wouldn't be at all comfortable if they were really people in there, and not just plastic toys!  Then there's the issue of the fact that the shuttlecraft controls are too high up in front for the characters to use them... to say nothing of the molded phaser that prohibits plausible navigation....

Yeah, I've seen better toys.  I keep these mostly as an interesting slice of history.  By the time Galoob lost the license to do Star Trek figures and Playmates picked them up, the television show had moved on significantly enough that the designs of most of those figures clearly depicted the characters at a different point in their careers (they did go back and do a few "first season" types, including a Yar figure, though).  And even besides that fact, only one set can ever be the "first," and when it comes to Star Trek: The Next Generation, this is that set.
Posted by Mark Baker-Wright at 12:00 AM