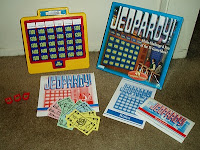 Given that Jeopardy! has a history dating back more than 45 years, it's probably no surprise that there have been a lot of home versions produced.  Of the board game versions (that is, not counting any fully-electronic versions or various versions one might play on one's television set), I think the 1999 version by Parker Brothers is definitely the best.

It's not necessarily the one that most closely duplicates the actual gameplay.  Other legitimately "board game" versions had incorporated electronic buzzers at least as early as 1987, which certainly made the answer to the question "who buzzed in first?" much clearer than the little clickers that this 1999 version comes with (visible on the left-hand side).  The thing that makes this version stand out to me is the fact that this version actually incorporates six categories per round. 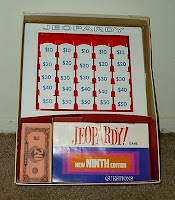 Since the television version of Jeopardy! has always had six categories per round since the show's beginnings in 1964, the fact that no version had included a board with six categories previously may come as a surprise (TYCO did a couple of versions of Jeopardy! in the mid-1990's that used six individual category stands, rather than a single board.  This allowed for the correct number of categories, but had a rather different aesthetic and play pattern entirely.).  But take a moment and do the math on those dates.  It took board game designers 35 years to make a Jeopardy! board with space enough for six categories!  For some reason, all previous versions of the board game--and all versions made since--have used boards that only had five categories per round!  (Pictured here is the 9th Milton Bradley edition, which I believe is from 1972.)

Of course, game play for all these versions (excepting the TYCO versions) is more or less the same.  Pick a category and dollar amount (it's worth noting that both of these versions use outdated dollar amounts since the television show adopted its current dollar values in 2001), remove the corresponding tab to reveal a clue.  Click (or buzz) in first to be recognized by the "host" and give your response in the form of a question.  Correct questions add that dollar value to your total, incorrect questions require you to forfeit that much money.  Daily Double tabs are hidden on the board (one for the first round, two for the second) to allow you to bet however much money you want out of your current total (or up to the highest value on the board, provided you don't have that much) to respond to a clue without competition from the other contestants.  Then, after the second round is completed, all contestants wager how much of their totals to risk on a "Final Jeopardy!" clue that all must answer by writing their response on a piece of paper.

Actually, "Final Jeopardy!" is one more aspect that the Parker Brothers version of the game "gets right" that others generally haven't.  If you'll notice in the picture above, the Parker Brothers version has a dedicated space for "Final Jeopardy!" at the bottom of the board, below the rest of the spaces.  In most other versions of the game, the "Final Jeopardy!" tab is taken from one of the second-round clues, revealed in advance so that no one would pick that clue before that round is over.  The fact that I care about such things is, no doubt, just a side-effect of my generally over-zealous attention to detail.  But I think that the fact that I'm not "cheated" out of 11 full answers-and-questions per game is worth caring about!

EXTRA: If using all that funny-colored play money is too unwieldy for you, perhaps you might want to use the "Jeopardy! Challenger."  This little hand-held device from 1987 is basically just a glorified calculator designed to help fans keep their own score while watching the show.  My grandma found this one for me a few years back, and this seems like the best time I'm ever likely to have to mention this interesting and hard-to-find collectible, although, to tell the truth, I generally just use a pen and paper, anyway (both for watching the show and for keeping score on the board game versions).