When the Robots in Disguise line introduced the character of Scourge, they started something of a trend.  Prior to the creation of that character, the only mold created for Optimus Prime that was ever redecoed to be used for another character was for the original Ultra Magnus, and even that only reused the cab portion (a part which, indeed, was never used in any of the fiction until years later... after the advent of Robots in Disguise).  Once Scourge was created, making "evil Primes" became something of a cottage industry within the Transformers franchise. 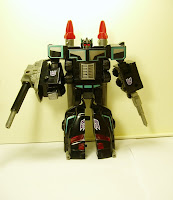 This version of Scourge was the third created for this character.  The first, of course, was the repaint of Laser Optimus Prime featured in the link in the first paragraph.  The second was the spychanger version mentioned at the end of the article on Brave Maximus.  This Scourge was created toward the end of the Robots in Disguise line.  After the line had mostly died down, really.  It was one of two toys released as exclusives to Kay-Bee toy stores under the "Destructicon" heading.  Even since the days of Generation One, I've always thought "Destructicon" was a name that should be used for a Decepticon sub-team.  It just rolls nicely off the tongue.  So I was glad to see it used here.  Like the original Scourge, Destructicon Scourge is a redeco of an Optimus Prime figure, in this case, Generation Two "Hero" Optimus Prime. 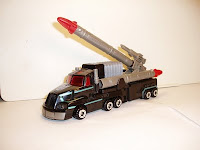 One of the nifty play features of this mold is the bellows in back, which can be removed from the truck and placed on the table for deployment.  Just pound down on the bellows while one of the missiles is in place on the launcher, and you can send the missile flying into the air.  Don't expect to knock down larger Transformers toys with this feature, but it's still pretty fun.

Perhaps ironically, although Scourge started the "evil Prime" trend, none of the "evil Primes" that have been created in years since (and there have been several) have been called "Scourge" (at least, not in the US).  Rather, the name "Nemesis Prime" has become more common.  I'll feature one of these next week.
Posted by Mark Baker-Wright at 12:00 AM