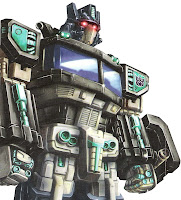 There's a running gag among Transformers fans that convention exclusive toys are heavily biased toward being black redecos.  This has been true of quite a few BotCon exclusives (especially since 2005), but it seems to be especially true of San Diego Comic-Con (SDCC) exclusives.  Back in 2005, the very first SDCC exclusive Transformer, Skywarp, certainly fit this bill.  In 2006, SDCC joined the Nemesis Prime bandwagon with Alternators Nemesis Prime.  In 2007, SDCC gave us a black repaint of the Titanium Rodimus Prime figure and tried to pass it off as Menasor.  Then in 2008, they went doubly dark, giving us a Titanium Skywarp and yet another Nemesis Prime, redecoed from the Classics Optimus Prime figure (Oddly enough, this past year's SDCC seems to have broken the pattern, with a new reissue of G1 Soundwave being the main Transformers exclusive).

The bio given to this version of Nemesis Prime describes a rather different origin than, say, Robots in Disguise Scourge, but both involve a Transformer given an Optimus Prime-like form without having Prime's ideals.  Nemesis Prime here is said to be a creation of Straxus, a character that appeared in the Marvel Comics series, who proved to be one of the more memorable comics-only characters.  Don't ask me how Nemesis Prime's creation fits into that continuity, though.  It's probably possible, but would take some shoehorning.... 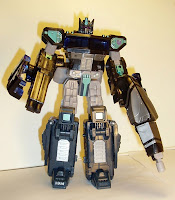 Having already talked about Classics Optimus Prime, there's not a lot of point in going over the different combinations Nemesis Prime's weapons can take, since everything's the same about this figure except for the coloring.  This is the kind of figure that won't appeal to everyone, but which I've always had a soft spot for, enjoying (and creating) "evil clone" characters even before Transformers got into the act officially with Scourge/Nemesis Prime types.  And although it's a bit more expensive than the average retail-released Transformer, as a SDCC exclusive, it was created in considerably higher numbers than BotCon exclusives, making it a bit easier to locate if you do want it.
Posted by Mark Baker-Wright at 7:00 AM