For Christmas morning, it seems appropriate to feature a Transformer that is, in every way, a gift.  Sometime in 2007, rumors started to surface of a new-mold Transformer through the usual (unofficial) channels.  It appeared to be a part of the then-already-defunct Universe line, which led to a strong belief that it would be an exclusive of some kind or another, rather than a mainstream retail release.  However, as this toy did feature an all-new mold, this was already unusual (if not utterly unique) for an exclusive toy.  Even more unusual was that this toy turned into a clearly-marked Chevy Aveo, which meant that the toy was actually licensed through Chevrolet, even though the toy clearly wasn't an Alternator (which were the only licensed-vehicle Transformers of that time).  The story only got stranger....

The rumors said that the toy was to be available only in China, and only through Chevy dealers.  Indeed, the rumors first suggested that you actually had to buy a Chevy Aveo, which sounded even at the time rather implausible.  The rumors eventually shifted to getting the toy if you test drove an Aveo, which was a bit more reasonable.  None of these rumors have ever been verified.  All that is known for sure is that this toy apparently was created at Chevrolet's request and expense.  As such, neither Hasbro nor TakaraTomy could use it themselves.  The only way you could get this toy was through Chevrolet directly.

The first verified means of distribution for the toy which was now known to be named "Swerve" came through a Chevrolet website in 2008.  Supposedly, these were specimens that remained after Chevy distributed the toys through a European (as opposed to Chinese) test-drive promotion, but again, this part has never been verified.  The toys were only available through the website for about a day or two, and being still clearly directed at the European market, any American that wanted to purchase one not only had to pay the higher-than-retail asking price and shipping, but an extra international fee on top of it, making this toy quite expensive.  The toy's supposed scarcity led to high resale prices when it would inevitably show up on eBay shortly afterward. 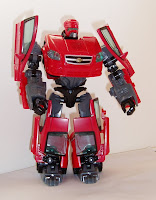 Then, in the summer of 2009, Chevrolet announced that Swerve toys (apparently not yet depleted through previous channels) would be given away for free, but only to those who attended a promotional event at one of several shopping centers in Canada (some sources say only in the Toronto area!) if you filled out a survey.  The TFWiki says that each site only had 20 Swerves to distribute per day, and only one per customer, but I have to question that part, since I got mine through a person on one of the message boards I visit regularly, and it's clear enough that he himself got more than 20 of the toys to distribute to fellow fans.  In fact, he sent them to us for free, even refusing offers to pay him back for shipping costs!  Truly, this figure was a gift, and to that fan, I say "Thanks!"
Posted by Mark Baker-Wright at 12:00 AM