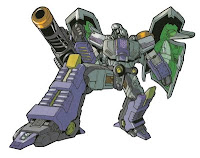 Last week, I emphasized that one of the goals of the Classics line was to give Generation One characters updated forms that were still somewhat analogous to their original ones. This means that, even if you haven't yet seen the Classics toy in robot mode, you probably would stand a good chance of guessing which character it was intended to be just by looking at its alternative form, provided you have a good working knowledge of the Generation One characters. This intention on the part of the designers meant that some creativity would have to be exercised in order to create a Classics Megatron that retained the Generation One commonality, yet kids would actually be able to purchase in toy stores.

As far back ago as the beginning of Generation Two, Hasbro no longer considered it viable for one of their toys to resemble a realistic weapon, such as Generation One Megatron's Walther-P38 handgun. That's why Generation Two Megatron is a green tank, and other "Megatron's" over the years have tended to follow suit (although there is admittedly much more variety among Megatrons than there is among Optimus Primes). That's not to say that Hasbro never sells "weapons." Their Nerf and Star Wars lines both have several examples of gun-like weaponry. However, all of these made in the past couple of decades adhere to some fairly strict guidelines. At BotCon 2002, Hasbro reportedly showed a picture of an attempt to recolor the original Walther-P38 Megatron according to these guidelines, so that they could sell it in stores. The result was said to be a horrifically eye-searing combination of bright blue and orange, and apparently "even that" wouldn't have been enough to make that mold viable for selling to children (Incidentally, a lot of adult fans ask "well, then, why not just sell it as an adult collectible?" Legally, that might work, but Hasbro simply won't risk their reputation by selling something that could harm a kid, and no amount of "adult" labeling and/or marketing is going to change that problem. If you want a Generation One Megatron reissue, import it from Japan.). Classics Megatron's alt mode, no longer tied to the Generation One mold, enabled them to design a "weapon" that wouldn't realistically be mistaken for a real firearm, yet still homaged the original. Even still, the "safety orange" is there for a reason. 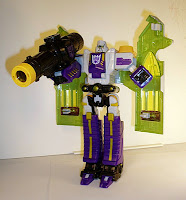 I think that it's safe to say that Classics Megatron is the most complicated toy of the entire Classics line. I find it infuriatingly awkward. It's not so difficult to the point of being inappropriate for a children's toy, but non-intuitive enough that I've probably only transformed this toy a total of three times back and forth in the three years I've owned it. Usually, it just sits on the shelf in robot mode.

As to the mildly Generation One-esque weapon mode, there's actually a debate that's raged on in the fan community over the years about just how viable a handgun alternate mode would have been for the evil Decepticon leader, anyway. In the cartoon, for example, Megatron usually has to be held by one of his soldiers to be used (and most often, it seems, that soldier is Starscream, the guy who's always trying to knock him off and take over leadership! Yeah, like that makes sense!). And in the Transformers club-produced comic that featured the Classics characters, Megatron is never actually seen using his weapon mode (granted, a lot of characters never seem to actually transform in these comics, perhaps a side-effect of only getting six pages every two months...). So, I figure I'm in good company if I just keep this toy in robot mode all the time.
Posted by Mark Baker-Wright at 12:00 AM