Dinobots in the Marvel Comics

As I mentioned yesterday, "Repeat Performance!", issue #8 of the 1980's Marvel Transformers comic, was my very first Transformers comic issue.  I had already been following the Transformers saga, with interest, through the toys and comics that my friends at school had, but it was the appearance of the Dinobots that finally got me buying the comic for myself.  From that point on, I never missed an issue, and I even made sure to get the previous seven issues as soon as I could, so that I could lay claim to having the entire series (something I'm still proud about, truth be told).

This issue is commonly considered to the be first (comic) appearance of the Dinobots, but that's not technically true.  In fact, the Dinobots were introduced in a flashback in issue #4, as part of the set-up for the cliffhanger that marked the transition of the comic from a four-issue mini-series to a monthly ongoing series.  In fact, I have always wondered what the original plan was.  The "alternate ending" shown in the UK seems to have been written later, and it therefore doesn't represent the original intentions.  And since Ratchet not only makes an oblique reference to this event in issue #3, but Megatron makes a similarly oblique reference to Shockwave (who also figures into the flashback) in issue #1 (long before any decision could possibly have been made to make this series ongoing!), it seems likely that the Dinobots were always a part of the earliest plans for the series in at least some fashion.

Whatever the original plans for the Dinobots were, it seems clear that writer Bob Budiansky wasn't entirely sure what to do with them.  They disappear entirely after issue #8, only to reappear just long enough to abandon the rest of the Autobots in issue #19.  They don't show up again until issue #27, where Grimlock assumes the role of Autobot leader (and does an absolutely terrible job of it!).   Although this enables Grimlock to finally take the spotlight for a while, the other Dinobots fade into the background, mostly serving as Grimlock's lackeys, even as the other Autobots chafe under Grimlock's leadership.  The Dinobots were certainly portrayed as belligerent, following their team leader's commands quite happily, especially as it represented a very different style from the more mild-mannered Autobots, but they were surprisingly not given quite the limited intelligence that their cartoon versions had, although Grimlock's tenure as leader definitely makes him out to be no Einstein.  All of the Dinobots (including Grimlock) are deactivated in a mass-Transformer-slaughter in issue #50. 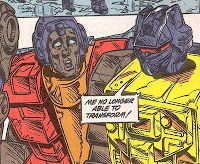 Shortly after this time, UK writer Simon Furman (who had already used the Dinobots a bit more frequently in the pages of the UK comic) took over as the main writer on The Transformers.  In Furman's very first US story arc, Grimlock was revived (granted, this may have been because a new Pretender toy of the character was now available in stores), and the character becomes the focus of a couple of significant story developments.  Notably, in an effort to revive his fellow Dinobots, Grimlock procures a substance called Nucleon, which revives not only the other Dinobots, but a number of other "classic" characters.  Nucleon also has the unfortunate side-effect of stripping Grimlock's ability to transform, but by the time the comic is canceled, he is the only Transformer thus afflicted, so it's debatable how much of the Action Master phenomenon is his fault in this continuity.

Under Furman's authorship, Grimlock also becomes Autobot leader once again.  When I first read this development, I was dumbfounded (don't they remember how badly that worked out last time?!?), but it seems to have worked out much better this time around (and, to be fair, it even works "in-continuity," as Optimus Prime was dead the first time around, and thus wouldn't have remembered Grimlock's first tenure as leader firsthand!).  The other Dinobots get a bit of "page time" in that same issue, although it's still mostly just so Grimlock has someone to talk to (glory hog!).  Actually, these last few issues go some way toward establishing the Dinobots as a pre-existing unit even before the Transformers crashed on prehistoric earth (this had been established in the UK, but not so much in the US comics).  It seems that they've always preferred to operate independently from the rest of the Autobots, a fact that actually works out to save everyone by the end of series.  No one can say that the Dinobots weren't important!
Posted by Mark Baker-Wright at 12:00 AM