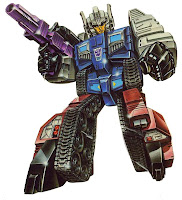 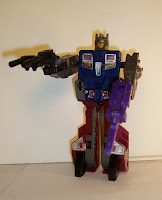 Like all Targetmasters, there is a sense in which Quake is, by himself, a normal Transformer.  If one were to lose his weapons, he'd still be a complete Transformer by himself.  You wouldn't be missing some vital body part or huge piece of his alt mode if the weapon were never recovered.  He'd just be weaponless.  This is in stark contrast to, say, the Headmasters, who kind of need their heads to be full-fledged robots. 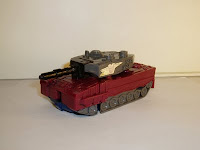 Indeed, since Quake turns into a tank, one could argue that he has (or, better yet, is) a weapon even without his Nebulan partners.  Of course, it bears mentioning that the turret itself is a removable piece, and although it could easily be replaced with one of the Nebulan weapons (as seen here), if the turret were lost, this mode really would seem incomplete. 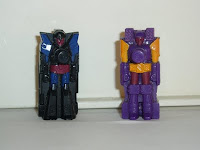 Pictured here (left to right) are the Nebulans, Heater and Tiptop.  In keeping with the smaller size of the toy they are packaged with, these two are completely immobile in humanoid mode, and don't even fold in half to transform like the Nebulan partners created for Targetmaster toys of the previous year (such as Stepper).  These guys "transform" simply by swinging a gun barrel down from behind.  Indeed, unlike most (but not all) Nebulans of the previous year, the "humanoid" forms of these toys don't even make any effort to hide the handles sticking right out of their chests! 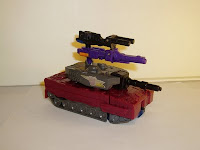 Like his larger forebears, Quake's Nebulans become weapons that he can use in either robot or vehicle mode.  However, for the Double Targetmasters, each of the weapons is designed so that one weapon can fit over the other weapon to create a "double-weapon," able to be used either on the vehicle mode (as seen here) or in robot mode.  You can put whichever Nebulan weapon you like on top of the other.  It works either way. 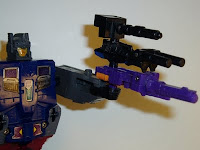 Quake's tank turret is removable, as I mentioned earlier, and has a peg of the same size as the handles of the Nebulan weapons, meaning that Quake has the feature (unique among Double Targetmasters) of adding a third weapon to the combined weapon mode.

A minor footnote.  From time to time, I make note of a toy that was exclusive to Japan, and not sold in the United States (at least, not during Generation One.  Many did eventually find their way to America some 20 years later).  Perhaps surprisingly, there are actually more molds that were sold in the United States, but never in Japan!  Quake is just one example of such an American-exclusive Transformer which has still never been sold in Japan (not even as a repaint)!  Fred's Workshop provides a list (apparently complied by someone else, but I don't know who "Greg" is).
Posted by Mark Baker-Wright at 12:00 AM