I wrote a bit about the origins of the Beast Wars line not that long ago, and even though that history is important to understanding this toy, it's probably best not to retread all that ground again so soon, so I'll just refer you to the entry on Beetle.  This version of Megatron was one of the very first toys to be released at retail as part of the Beast Wars line in 1996, being part of a two-pack with the original version of Optimus Primal.  Normally I review multiple toys that were packaged together at the same time, but when I got Megatron at BotCon this year, I purchased it loose, and I do not have Optimus Primal, so Megatron will have to stand on his own. 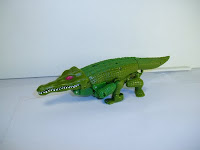 Like the McDonald's Happy Meal toys that included Beetle, Megatron demonstrates a couple of signs of the Beast Wars concept still being in its infancy, and not quite yet broken away as an altogether new line of Transformers.  One indicator of this (only obvious if one knows how the Beast Wars line will eventually evolve) is this toy's alternate mode.  This version of Megatron is a crocodile, whereas pretty much every other version of Megatron in this line is a Tyrannosaurus Rex (the one other exception is a dragon, which is still far closer to a T-Rex than a crocodile!). 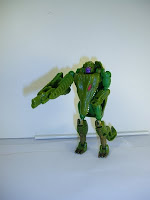 Megatron's transformation is pretty simple.  Pull up on the tail, and the whole toy opens up to more or less the final robot mode.  All one really has left to do is pose the robot legs, make sure the crocodile legs are out of the way, and that the robot fists are fully in place.  You do also have to take the tail off of the back of the robot mode and flip a section over to create Megatron's weapon, which then goes in either fist.  Personally, I prefer to leave the tail on the back, but it's really not worth another picture here, and I'd be remiss if I didn't demonstrate the weapon, as mediocre as it is. 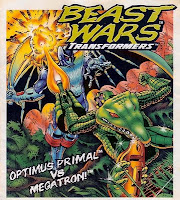 I said that there were at least a couple of signs from this set that the Beast Wars concept was still not yet fully formed.  The other one is the mini-comic that was packed in.  The comic implies that the Megatron and Optimus Primal seen here are simply new, updated forms of Generation One (or, if you want to nitpick, Generation Two, but at this point there's really no difference) Megatron and Optimus Prime.  When the Beast Wars cartoon (which almost every other Beast Wars continuity claims as its own, and which used the later gorilla and T-Rex forms of Primal and Megatron, respectively) came out, it was clear that these characters were not the same as the originals, but merely shared their names.  This discrepancy, coupled with the unique crocodile beast mode, means that this toy may not represent the same character as the one usually referred to as "Beast Wars Megatron" at all!
Posted by Mark Baker-Wright at 12:00 AM