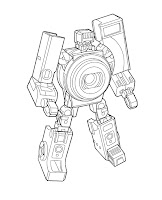 Back in the first few years of the Generation One line, toys that changed into mechanical devices rather than vehicles (that is to say, cassettes, hand-held weapons, and cameras, as opposed to cars and planes and so on) were reasonably common. But as the Transformers line evolved over the years, such non-vehicular forms became less common. The "Real Gear Robots" sub-set of the 2007 movie toyline marked a return to such mechanical devices after a long absence (roughly 20 years, as close as I can tell, at least in regard to all-new molds). 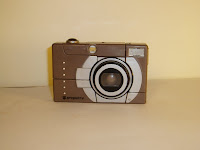 Spy Shot 6 is, like Reflector, a camera, albeit a modern digital camera rather than a 20-year-old style film variety. Like Reflector, you can press the button on the top of the camera with a satisfying "click" to imagine you're taking a picture. Unlike Reflector, Spy Shot 6 transforms into a single robot. 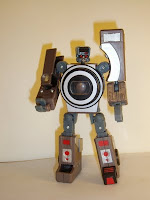 I'm mildly surprised, and maybe just a little disappointed, that the toymakers didn't take advantage of the opportunity to fully homage the Reflector toy (or at least the character) by at least using Reflector's name, given the clear connection. But since most of the other "Real Gear Robots" have names that themselves sound more like models of Earthen mechanical devices than character names (others include "Farsight T-20," "Speed Dial 800," and "Zoom Out 25X"), I guess it makes sense. 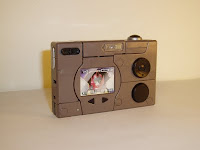 Although the packaging ties the "Real Gear Robots" toys to the movie line's sub-plot involving the Allspark, which grants life to such mechanical items, these toys were apparently not designed with the movie in mind, but rather were developed near the tail-end of the Cybertron line, and then held back for unknown reasons. A vestige of the Spy Shot 6's origins may be seen on the back of the camera, where a picture of Cybertron character Ransack is visible. A later use of this mold within the "Real Gear Robots" sub-line (called Photon T-34) uses an image of movie Frenzy instead, and the TakaraTomy version of this very toy uses an image of movie Optimus Prime. One wonders just whether Hasbro didn't have enough time after the decision to move these toys to the movie line to change the Ransack image, or if they simply decided that it didn't matter all that much.
Posted by Mark Baker-Wright at 12:00 AM