This week's feature is about a toy that technically doesn't exist.

It's not a knock-off, and it's not a custom toy except in the loosest of terms. It's an officially sanctioned character, and this entry is about the physical manifestation of that character. But this character has never been available for sale anywhere.

Who is this character of mystery, you ask? I'm talking about "Shattered Glass Huffer." 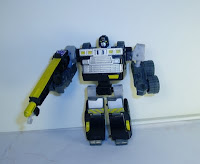 Technically, this toy is really the 2007 movie version of Armorhide, which is a repaint of the Armorhide toy created for the Cybertron line. To fill out the movie line with some exclusives, Target commissioned a series of "Scout-class" (the roughly $7 size) repaints from the Cybertron and Energon lines. Some of these were given the same names as their earlier counterparts, as was the case with Armorhide, while others were given new identities. Although these were nominally "movie" characters, none of these toys were given any representation within the movie itself, and frankly don't fit the movie "shrapnelbot" aesthetic anyway.

So, after BotCon 2008 introduced the idea of a "Shattered Glass" universe, where Autobots were evil and Decepticons were good, Greg Sepelak and Trent Troop, the writers behind most of the current official Transformers club prose fiction, took it upon themselves to expand the ranks of the "Shattered Glass" universe by "repurposing" several toys. The BotCon 2008 comic itself created precedent for this, using "Music Label" Soundwave to represent "Shattered Glass Soundwave," for example. When the prelude for "Dungeons and Dinobots" was published in the club magazine, the description of "Shattered Glass Huffer" (henceforth referred to "SG Huffer") made it clear that Sepelak and Troop intended for the movie Armorhide toy to represent this alternate version of the Generation One character, despite no images ever having been created to demonstrate this fact. 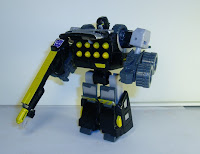 This, itself, wasn't a huge stretch. After all, an earlier repaint of this very mold had already been created for BotCon 2007 as "Classics" Huffer. Still, it wasn't enough just to take movie Armorhide and say "this is SG Huffer." The symbols on Armorhide as he was sold were all wrong. You see, many of the movie Scouts were given faction symbols to suggest that they were part of an experiment by the human initiated "Sector Seven" of the movie, given life by the Allspark while it was under Sector Seven's control. It seems that this idea didn't go as far as the actual bios written for the toy packaging itself, as had been done with the "Real Gear Robots," but the Sector Seven symbols still couldn't very well pass as the "evil Autobot" symbols SG Huffer required. 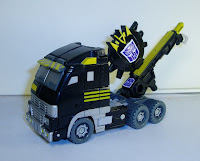 Louisville-based web store Captured Prey came to the rescue through an arrangement with Reprolabels to sell "Shattered Glass" faction symbols. A few well-placed applications later, and the "Sector Seven" symbols are now completely hidden by the "evil" purple Autobot symbols, making this toy Armorhide no longer, but truly Shattered Glass Huffer!
Posted by Mark Baker-Wright at 12:00 AM