At the Signing of The Allspark Almanac 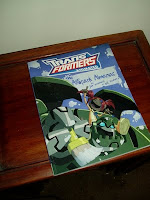 I've been following the Disciples of Boltax blog, managed by Jim Sorenson, for some time now. Like me, Jim is a fan of the original Marvel comic, and does reviews of each of the issues of the series, in order, about once a week or so, interspersed with toy reviews and reviews of UK comics done by other contributors. Through his blog, Jim let the Transformers fan community know that he would be at a comic shop in Burbank this past Saturday to sign copies of the recently-released Allspark Almanac (with co-author Bill Forster and Transformers: Animated designer Derrick J. Wyatt). Having already been impressed with Jim and Bill's work in collecting Generation One art for The Ark, of which I got the first volume shortly after it came out a couple of years ago, I decided to trek over to Burbank and take advantage of the opportunity.

Having survived the lines at BotCon, having to wait behind a couple of people (even one who must have been having books signed for a dozen or so of her closest friends) wasn't really a chore at all, and Jim and company are all very decent folks (in fact, Jim sounded a bit chagrined at the fact that he and Bill had gone ahead and made the original volume obsolete by putting out The Complete Ark, which not only combines the first two Generation One-themed volumes, but adds a little bit more besides. They had a few pre-release copies of that available, too, but I'm perfectly happy with the one I've got--especially having gotten it signed, too!). I'm always glad to support fellow fans who manage to do something official for the Transformers fandom. After all, if enough folks buy these books, the powers-that-be will see that the market exists to make more!

I'm not really equipped to give a proper review, but suffice it to say, this is a nice book. Whereas the art for the Generation One books was all black-and-white line art, this stuff is in full-fledged color! It also has a fair bit of text, usually written from the perspective of some character or another in the Animated universe. Having an "in continuity" perspective is still fairly uncommon in this kind of official Transformers guidebook, but it works quite well here. Also, for the truly hard-core Transformers fan, there are TONS of in-jokes and references here (try translating the Cybertronix that pops up on a good number of the pages!). Yet it's all done in a way that won't detract from the more casual fan's enjoyment. That's harder to do than most people think, and I really want to give the writers credit for such an excellent job.

So whether you're interested in just the art itself, or in seeing the Animated universe continue a bit beyond the end of the recently-completed cartoon series, I definitely recommend picking this book up. Especially if you're in the latter category, actually, since Jim indicated on the Allspark that if this book sells well, it may encourage IDW to do a "Season 4" comic series, which Animated story editor Marty Isenberg would apparently like to do. So go out there (or click the link) and buy your copy!
Posted by Mark Baker-Wright at 12:00 AM