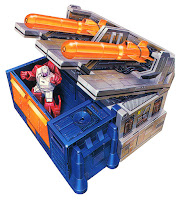 Last week, I wrote about a set of Micromasters: tiny toys that Hasbro designed to compete with the then-popular "Micro Machines" cars found in toy stores of the time. Since each Micromaster was only about two inches tall, Hasbro either had to sell several in a package (as with the Race Car Patrol), or find other things to include with them in order to give enough substance to the set to be worth the usual prices they wanted to charge for the toys. This led to the creation of several bases and playsets being sold with Micromasters. These playsets could themselves transform in some way or another, adding play value to the set. Airwave itself was a repaint of Nightflight, a member of the Air Strike Patrol, a set of four Micromaster Decepticon planes. Although repaints have existed in the Transformers line since the very beginning, they'd taken on a diminished role in the couple of years prior to the release of the Micromasters. But with only a few rare exceptions, Micromasters that were sold as part of a base or a playset often were repaints of figures sold as one of the lower-priced four-packs. This type of thing enables Hasbro to make the most out of the costs involved in creating a mold, and is why the practice of using repaints remains so common today. Since Airwave turns into an airplane, it perhaps makes sense that he would be paired with a small airport as part of his playset. This airport consists of little more than a runway with a hangar and a small control tower, but it conveys the idea fairly well. This specimen features another example of my childhood fascination with adding glow-in-the-dark paint to my toys, although here the effect is thankfully limited to just the control tower, where it at least makes a bit of sense. That ramp on the side is included so that you could connect this playset to one of several of the other Micromaster playsets available at the time. The idea was that you could create a "city" by doing so. As I mentioned earlier, these Micromaster playsets themselves could be transformed. In the case of Airwave's airport, it could change into a small missile bunker, from which Airwave could (theoretically) launch attacks against the enemy. Since both the airport and the bunker are stationary objects, I'm curious as to how the Decepticons would have moved the base from place to place so that it could be deployed effectively, but since Airwave never showed up in any of the fiction (if he even showed up in Japanese fiction, I remain unaware of it), I have no canonical answer to that question.