Tuesday Morning is one of those "gift stores" that specializes in selling stuff that other stores don't want anymore, and sells those items at massive discounts. Usually, there's a reason why the other stores didn't want the stuff in the first place, but one can occasionally find good deals there. Last year, quite a few Transformers Energon figures and G1 reissues were able to found really cheap. But that kind of find is unfortunately rather rare.

While there don't seem to be any authentic Transformers to be found at Tuesday Morning these days, there are a number of knock-offs that are showing up. None of the knock-offs are, in and of themselves, all that unique. This kind of thing has been showing up at Big Lots and in other bargain outlets for quite some time now. But the fact that these are showing up in two-packs is a bit different. 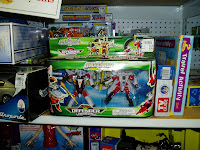 Last week, I discovered this pair of knock-off Cyberjets. Knock-off Cyberjets are a relatively new phenomenon. I don't think I saw any prior to this past year. The figures in this box use the molds originally used for G2 Skyjack and G2 Space Case (left to right). I was more intrigued, however, by the images of Star Saber and Victory Leo on this box. Sadly, I couldn't find any knock-offs of them around (either knock-offs of the originals or of the more recent "RobotMasters" versions. I don't claim to be familiar enough with those particular Japanese exclusives to be able to tell which version is depicted on the box, although I'd guess the "RobotMasters" versions are more likely). 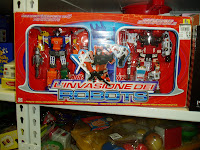 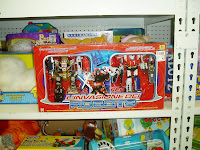 I found these two items while at a different Tuesday Morning yesterday. Each of these two-packs features a "Micromaster" combiner (Sixbuilder on the left of the picture on the left, and Sixliner on the right of the picture on the right) packaged with a downsized version of a "Scramble City"-style combiner (Defensor on the right of the first picture, and Bruticus on the left of the second picture, although in keeping with the pattern of most knock-offs, the color scheme of "Bruticus" more closely matches "Baldigus" from the Japanese "Car Robots" line).

As might be expected, the plastic quality of these knock-offs looks to be pretty low. But if you're looking for cheap Transformers, or are looking for fodder for a custom creation, these might be worth checking out.
Posted by Mark Baker-Wright at 11:05 AM