I've written a lot about some of the specific events, but I really haven't said much about the convention overall, and here it is, the end of the week. Well, now's the time to get everything out, no matter how long this entry gets!

First, the Dealer Room was pretty good. It didn't strike me as quite as large as Anaheim in 1998, or Pasadena in 2004, but there definitely was a lot of unused space in Pasadena, so I expect that the Pasadena Dealer Room may actually have had fewer sellers. I can't be sure. Either way, it definitely had a good variety of folks there, although I was surprised that no one seemed to have the Classics figures (which had been reported as just now beginning to show up in some stores) available. Maybe they just sold out before we saw them. We were also surprised not to see a booth from the Reprolabels folks, who were (to the best of my recollection) at both of the other conventions I was at. 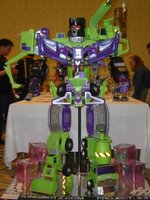 While there wasn't a separate art room at this convention, as there had been at the other BotCons I attended, there were definitely a fair number of pieces on display. My favorite was this huge Devastator, with lots of "easter eggs" scattered across its massive form. You'll probably want to click on the picture for a larger image from which to search for all the Transformers toys on this guy. No one was surprised to hear this piece announced as one of the big winners in the art contest. 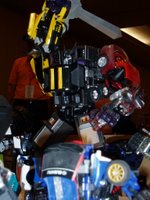 Also worth noting was the Menasor created using Alternators vehicles that someone else had done. I think this one also won a prize, although I'm not sure. While I was present for the announcement of who won the art contests at the dinner/casino night on Saturday, I couldn't remember many of the names the pieces were given, and I don't recall anything specifically "Menasory" about the names I heard announced as winners. Anyway, if this one didn't win, it should have! 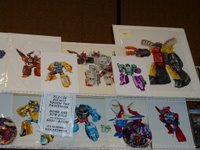 One of the dealers had a whole bunch of original G1 art on display that you could buy, if you had enough money on hand. The cheapest stuff was listed at being $650! Needless to say, I had to settle for taking pictures like this one. The same guy had a bunch of boxed figures with their original toy store stickers on them, but no updated price tag, leading my brother to joke "yeah, I'll buy that one for 10 bucks!" If only! 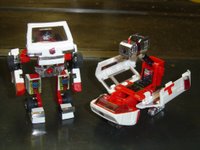 One of the highlights of the Dealer Room was the large booth from which the Hartman brothers were selling off their legendary Transformers collection. As promised, they kept prices manageable, and I expect that most fans who wanted to get something from this booth were able to find something in their price range. My brother picked up a loose Ratchet from the Hartman booth, which he is now proud to call his own. I was tempted to pick up a loose Seacon with its card for about $25 (a fair price for such an item, especially given the minor bragging rights of saying "I have a piece of the Hartman collection"), but couldn't quite make myself do it. (If I had, I'd no doubt be looking to get the rest of the set! Best not to get started on the Seacons until I'm financially able to deal with getting all of them together.) 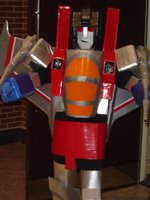 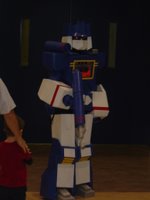 As is typical for many fan conventions, there were a few folks who came in costume. These two, dressed up as Soundwave and Starscream, were especially good.

I was a bit disappointed that there was no "script reading" this year. This has been something of a tradition over the years BotCon has been around, whereby the various voice actors get together and read a sktech especially prepared for the convention in the roles they made famous in the cartoon. It's always rather tongue-in-cheek, and often hilarious, but we were told at the dinner/casino that the venue just wasn't appropriate for it this year. Well, I agree that they couldn't do it at the dinner/casino, but they could have had a forum specifically for the purpose, like they did in 2004 (all other "script readings" were indeed during a dinner, but there was no dinner at BotCon 2004).

Not being the most social of people in person, I nevertheless did get to talk to a couple of online friends during my time there (you know who you are!). Also, I'm glad to finally have a face to put on Brian Savage's name, despite the fact that I did not speak with him personally. I do still think that there are a number of problems that Savage's organization (Fun Publications) needs to work on that other convention organizers were better at, but it definitely does seem clear that the convention is in solid hands nonetheless. Although Savage has, historically, not responded as well as might be hoped to criticism in his immediate comments to fans, it is clear that he does actually listen despite the appearance that had been created a year ago.

In that vein, it's worth noting that the news that next year's convention in Rhode Island will be in the summer may be more related to the fact of the movie's July 4th release date than in response to the fans requesting a summer date, but you can be sure that Brian will be looking very carefully at the numbers of fans that show up at the 2007 convention. If you're one of those who want to see conventions in the summertime in the future, BotCon 2007 will the time to put up or shut up. The numbers that came to the convention this year were quite high. If we can't beat that next year, we have no reason to expect Brian to see any purpose in holding BotCon in the summertime ever again.
Posted by Mark Baker-Wright at 6:55 AM