I pretty much only got to talk about the game show at BotCon on Monday, and even that took a fair bit of space. Let's see if I can cover the other aspects of the convention with a bit more brevity....

The other main event my brother and I attended on Friday was the TCC Newsletter and Convention Comic panel, where we got a couple of insights into how the club is being run. Of particular interest to me was the fact that, although Fun Publications has been pressuring Takara to complete the production of Astrotrain (the promised first club exclusive), the folks at Takara tend to shuffle their feet for small runs, hoping that the group seeking such runs will eventually give up (note: this doesn't seem to be a problem for Japanese companies like eHobby, or for the "Lucky Draw" exclusives, of which very few are ever made. One can only assume that the fact that Fun Publications is an American company is a factor.). FP hasn't given up, but this attitude has contributed to the delay in getting Astrotrain to club members. FP currently expects pre-orders to be available in November, with the toy shipping around February or March.

Since we were commuting from Louisville, and since most of the events we wanted to see were on Saturday, my brother and I actually left the convention by dinnertime, although we did spend some time in the Dealer Room (which I'll talk about more on Friday's blog entry). On Saturday, we arrived around 10 am or so to see the line of walk-in hopefuls waiting to get in. It was very long, and we were glad we had pre-registered. I was also glad I had made the extra trip on Friday to pick up my exclusives, as they were already sold out by the time we'd arrived on Saturday.

After a short time in the Dealer Room, we went to the Hasbro product unveiling. Although there were a few new revelations, including the expected repaint of Classics Bumblebee into Cliffjumper (but apparently without bothering to remold the head), but most of the stuff they talked about had already been revealed online. They also showed a brief video clip designed to hype the upcoming movie, but it really wasn't anything special, and didn't show any Transformers (at least, not as robots) at all. It could have a been pretty much any summer movie. Lots of explosions and cars flipping, but nothing much else. Still, the crowd seemed to be pleased, and asked for a second viewing. Since this was the end of the forum, my brother and I skipped out of the second viewing to get in the line for Peter Cullen autographs. 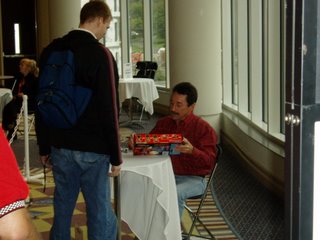 I've already shown off a picture demonstrating that I had gotten to the end of that line, but here's one with my brother, who had Cullen sign his re-issue Optimus Prime, followed by a close-up of the signed box. 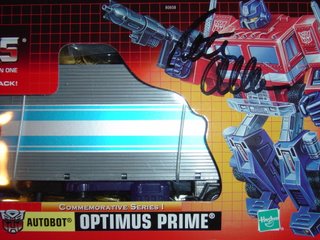 Unfortunately, the autograph line was very long, and so we were unable to attend the Transformers Club Roundtable, which wasn't too big a deal to my brother, who's not a club member, but I really wanted to be there. Ahh, well. I guess that's what we get for choosing not to go to the first Cullen signing, which would have required that we arrive by 9:30 that morning.

Part of the reason we chose not to do that is because we knew that Saturday would be our long day, culminating with the Casino Night and Dinner that evening. I've got plenty of comments on that, too, but it seems that I've already written for quite a long stretch, and I've got quite a bit to say about this, so I'll just close with this picture of the line waiting to get in to the dinner, and promise to continue my BotCon reflections with a bonus entry tomorrow, finishing with more general reflections on Friday.
Posted by Mark Baker-Wright at 6:49 AM