Well, this year's BotCon has come and gone. While I was not able to spend the entire weekend at the convention, I spend a good part of Friday and most of Saturday there. Lots of stuff to talk about, but here are a few highlights for right now.

After collecting my box set of toys and securing the extra souvenirs (at a whopping $150 more for those four figures!) on Friday, the first thing my brother and I got to see was the "Faction Feud" game (or, at least, the first rounds of it. We didn't get to see the ones they played on Sunday). While these first games were plagued by a bit of technical difficulties, and some confusion that is perfectly natural for the first time doing a particular kind of attraction, the basic format of the game worked well, and I think was a lot of fun for all concerned. I like to think that I had a hand in getting that idea off the ground when I first suggested doing a "game show" event at the top of the year on the club message boards, and although the game that was played was not quite as I had envisioned it at the time, I think that it was very successful, and has tremendous potential for future conventions as they work out the kinks. One suggestion: Don't make the third round worth so much that it invalidates the previous rounds put together (in this case, it was 1000 points per question in Rounds 1 and 2, and 10000 points per question in Round 3). Rather, I would suggest 1000 points each in Round 1, 2000 points in Round 2, and 3000 points in Round 3. It's perfectly fine for later Rounds to be worth more, to make it possible for a team behind to catch up if they rally. But the point system used here was excessive. 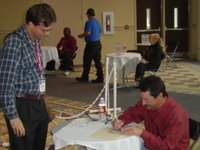 I'm spending much of today catching up at work, making up for the days I took off to attend the convention. I'll have lots more to say on Wednesday when I've got more time to devote to typing it all out. In the meantime, I will close by adding that it was a privilege to meet Peter Cullen (voice of Optimus Prime), who was kind enough to stay beyond his previously-agreed autograph time to make sure that everyone that made it in line got a chance to see him. While I'd gotten an autograph of Cullen in 2004, that was part of the pre-registration package, and I did not actually meet him at that time. This year, I corrected that oversight. Here's a picture my brother took while I was getting my program signed (click the picture for a larger version).
Posted by Mark Baker-Wright at 7:21 AM